In the ma'abara, but outside the big tent 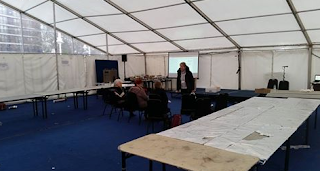 A  Harif session took place in a tent outside the main building at Limmud (photo: Ashley Perry)

The Jewish refugee issue still needs to become a mainstream Jewish concern and make headway with the young, as Lyn Julius of Harif discovered when she held a session at Limmud conference in Birmingham last week. She blogs in The Times of Israel:

It was standing room only when Aisha and Nadia, two Syrian refugees in hijabs, told their story to an earnest crowd of Limmudniks at the annual conference in Birmingham this week.

Tuesday was Refugee Day at Limmud.  The almost 3, 000 attendees  were offered a rich diet of presentations that day. Every aspect of the Syrian refugee crisis was examined, while Limmudniks salved their liberal consciences with a focus on social action, the importance of interfaith relations and the dangers of islamophobia .

In complete contrast, only four brave souls came to a session by Harif, which represents Jews from the Middle East and North Africa in the UK.  The session on ‘How Jewish Refugees can help reframe the Israel debate’ vied for attention with 29 other presentations, including a session on Ladino music. Competition was just too stiff.

Whether by accident or by design, the marquee replicated the conditions that 650, 000 Jewish refugees experienced when they first arrived in Israel in the 1950s. These had been housed in transit camps or ma’abarot, makeshift tents or huts with no heating in winter and not enough food.

While it would be unfair to blame the Limmud programmers for Harif’s poor showing – they did allow this and subsequent Harif sessions to take place and did their best to accommodate us  – it is nevertheless disappointing that so few Limmudniks turned up to hear about Jewish refugees.

The Jewish refugees are patently  ‘outside the big tent’ of universalist Ashkenazi concerns. It is a safe bet that the 100-plus Limmudniks who flocked to hear Aisha and Nadia did not have a clue that 38, 000 Jews had also been displaced from Syria in the last fifty years.

Did they know that a larger number of Jews had been uprooted than Palestinian refugees? That almost a million Jewish refugees from the Arab world had been denied recognition and compensation? That their flight has crucial ramifications for peace and the struggle against Israel’s delegitimisation?

Jews seem always keen to burnish their universalist credentials, while remaining indifferent to the travails of their own people.

This disappointing lack of awareness, especially among the young, presents a challenge to Harif. Although the audiences were bigger for its later sessions, few were under fifty years old.

A visitor to Limmud from Israel, Ashley Perry, the architect of the Jewish refugee awareness campaign when he was adviser to the deputy foreign minister Danny Ayalon,  took away this lesson:  Our challenge is to educate our own Jewish community on this issue – before we can hope to reach the outside world, ” he said.

Read article in full
Posted by bataween at Monday, January 02, 2017

"How Jewish Refugees can help reframe the Israel debate".
Was that the exact name of the session?

I have already noticed this tendency to not specify "from Arab and Muslim countries" more recently in David Harris' letter to Kerry. It can be confusing.

It is the case throughout this article as well. Is it concerted? Or simple oversight? In this case how do you expect your average European/Ashkenazi to guess it's not another lecture on the Shoah?

Simple oversight. The description in the Limmud programme makes it clear that these are Jewish refugees from Arab countries.