Update (with thanks Lily): Bahraini youth from the Youth for Jerusalem chapter wearing cleaners' overalls went to the site where Jewish tourists danced with Arabs at Hanucah to scrub the-pavement outside. The underlying idea is the Shi'a prejudice that Jews are unclean and Muslims should not have contact with them. See MEMRI Video: Transcript here.


Extract:
A cleaner's coat reads '1948':
“In the Name of Allah, the Merciful, the Compassionate We, the Bahrainis, will redeem Palestine and the Arabs, and even all Muslims”
“1948 Bahrainis participated in mass demonstrations and waged Jihad with their money and souls against the Partition Plan and the occupation of Palestine”
A cleaner’s coat reads '2002':
“2002 The establishment of the Permanent Parliamentary Committee for Supporting the Palestinian People in addition to the ongoing governmental support”
Voice over: "... Defending its just causes, first and foremost the Palestinian cause."
A cleaner’s coat reads '2009'
“2009 Mass Protests against the tyrannical Zionist aggression against Gaza
A cleaner scrubbing the floor’s coat is marked “2011”
Voice over: “As we told our brothers in Gaza, we will support them as much as we can. We will wipe away this stain on the shining history of our lands. We, the youth of Bahrain, will not forget our cause, and we will keep marching on this path until Palestine is regained - in its entirety!”
“#Bahrainis_against_normalization”
--------


With the possible exception of the king and his immediate entourage, it seems that few Bahrainis are prepared to  'normalise' relations with Israel, let alone see Bahrainis dancing with Jews as anything less than a provocation. Elder of Zion reports: 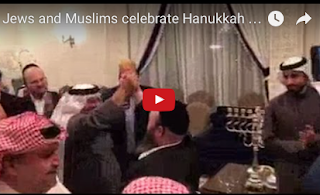 The backlash from the videos of Jewish Americans dancing in Bahrain keeps snowballing. A dozen "civil society" institutions have condemned it, saying:

The visit of this delegation was provocative and the accompanying dances to the music of Talmudic songs called for the establishment of the temple on the ruins of Al-Aqsa Mosque, in front of historic Bab Al Bahrain [square], and before that in the house of a businessman with a number of traders..This provocation caused a deep psychological wound and is blatantly opposed to Arab and Islamic values ​​in support of our brothers the heroic Palestinian people against the arrogance of the Zionists and their obnoxious occupation of the land of Palestine violating all moral and human values.

The  Bahrain Council of Representatives sent out a series of Tweets denouncing the event.

"The House of Representatives expresses its rejection and condemnation of what was done with a number of traders and businessmen in the Kingdom of Bahrain from trying business and social  normalization  with the visiting US delegation. We stress the strong condemnation of the unacceptable behavior, which provoked and embarrassed the Bahraini street which supports the rights of the Palestinian people. The Hebrew dance and songs called for an alleged temple on the ruins of Al-Aqsa and they handed the [Bahrains] the Masonic logo.[This means a menorah - EoZ]
The Council reiterated Bahrain's position of rejecting all forms of normalization, communications and establishing relationships with the rapist Israeli entity, and that any move and act opposed to Bahraini law, and the principles of the Bahraini people."
Posted by bataween at Monday, January 09, 2017