Predictably perhaps, Ron Calilli of Haaretz sees the soldier Elor Azaria, convicted for shooting dead a Palestinian terrorist lying on the ground, as a Mizrahi victim of years of establishment incitement against the Arabs. There is no attempt to see Azaria's hatred of Arabs in the context of centuries of Jewish fear and mistrust in Arab countries. 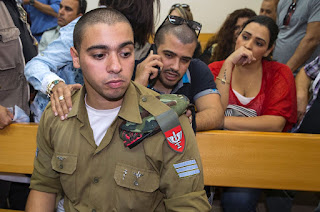 Azaria is the child of the new Israeli right, one which looks Mizrahi and is characterized as devouring Arabs, while being subjected to years of incitement by politicians. He’s not the successful and enlightened child of upscale Rehavia or some kibbutz, one who voted for left-wing Meretz and galloped through the streets of Tel Aviv in that wondrous summer of social protests in 2011, enjoying a tailwind from mainstream media. He is the child of poorer neighborhoods, in this case one in Ramle, in which the blogger-rapper “The Shadow” and the extremist and racist La Familia group are more popular than that “transvestite,” Bibi.

Azaria is not a child who attended some elite school, one whose treatment by the courts we’re all too familiar with, a propos equitable treatment by law enforcement and the justice system, with one reminded of the problematic statement by former Supreme Court Justice Aharon Barak (“This court is a family, one can’t bring in someone who isn’t part of it”).

Where did you find that information?

the haaretz writer is lying and he likely knows it. After all, the old elite has been shielding Arabs from the opprobrium that many Arabs deserve. And have been covering up --or failing to understand-- traditional Arab culture and its Islamic values of Muslim supremacy over all others, including the right to kill rebellious non-Muslims. Look at what happened to Armenians in the Ottoman Empire. Traditionalist Muslims, Arabs, Turks and others, often resented the equality of dhimmi peoples to the extent that it was imposed on the Empire in the late 19th century. Traditional Islamic society is an Islamic supremacist society, whether in India or Azerbaijan or Indonesia or Egypt, Tunisia and Morocco, etc.

One of the problems with the old school curriculum in Israel is that it avoided the subject of Muslim/Arab oppression of Jews as part of shari`ah, Islamic law. Hopefully, the current minister of education, Naftali Bennett, can correct the flaws in the old curriculum. To say that the "right-wing" politicians are to blame is ridiculous. Can't this Haaretz scribbler give Mizrahim some credit for having learned at home how their families were treated in Arab and other Muslim lands? Can't he accept that young people --not only Mizrahim-- might be disgusted and/or enraged by the mass murder attacks perpetrated by Arabs against Jews, whether these attacks are inspired by Da`ash or Fatah or Hamas or by our supposed "peace partners" in the palestinian authority, like Mahmud Abbas? And how should a well-informed young person feel about Arabs and Muslims, knowing that they also perpetrate mass murder attacks in the USA, France, Belgium, Germany, Russia, and so on.

Does Callili want to claim that any suspicion or resentment of Arabs/Muslims or their leaders in Hamas and Fatah and so on is groundless and the product of pure ignorant prejudice? Knowing what has been happening throughout the world in recent years, does Callili want to put all the blame on "right-wing" Israeli politicians for how Israeli young people feel about Arabs?