Egoz tragedy was catalyst for aliya

It is 61 years this month since the tragic sinking of the old Pisces launch (renamed the Egoz) with the loss of 44  on board (42 Moroccan-Jewish would-be emigrants to Israel, one Israeli radio operator, one Spanish machine operator - Paco Perez. The rest of the crew survived). The boat was on its 13th illegal voyage to Gibraltar from Casablanca. Gilad Kabilo, whose family was on the 12th voyage, writes in the Jerusalem Post (with thanks: Lily, Imre, Sylvia): 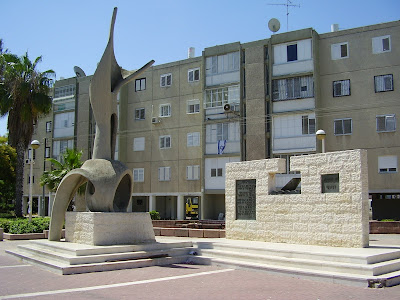 Monument to the Egoz dead in Ashdod, Israel

King Mohammed the Fifth, who some say had favorable views of his kingdom’s Jewry, continued to allow aliya (immigration). Moroccan Jews, raised on passionate Zionist ideals, had been making aliya in great numbers – over 72,000 Moroccan Jews made aliya between 1948 and 1955 – and still over 200,00 Jews remained in Morocco.

By 1961, over 30,000 more Jews made the perilous journey from Morocco to Israel, weathering freezing seas and subhuman conditions in their hope to reach the Promised Land.

The Egoz tragedy was the catalyst for a new arrangement. Morocco, always more attuned to the Western world than other Arab countries, began facing pressure from France and the United States to stop preventing Jews from leaving to Israel and to an establish an organized channel for departure. Thus, an agreement was reached between the king and the leaders of Morocco’s Jewish community, with American and French involvement and the oversight of the Israeli government, to allow the immigration of Jews out of Morocco to any country except Israel. This agreement was the precursor to Operation Yachin, under which over 80,000 Jews made aliya to Israel through a third country, mainly France and Gibraltar.

On January 9, a night before the departure of the Egoz, another family made the perilous journey across the Mediterranean to their homeland. My family, immortalized in a photo of them waiting for the next ship on the shores of Gibraltar, ended their journey home in the northern town of Hazor Haglilit, with nine children who have since begotten dozens of proud Israelis. Though they left Morocco in the dead of night with nothing but their heaviest blanket, the word “refugee” was never heard in my father’s house. Making aliya through choice and not for a lack of it, this Moroccan family, like thousands of others who make up Israel’s diverse nation, has never looked back – they are home.

Fifty years since 42 Jews died in the sinking of the Egoz
Posted by bataween at Tuesday, January 31, 2017

What is less known is that the tragedy of the Pisces had ripple effects that affected the lives of thousands of Moroccan Jewish students and intellectuals well into the late sixties and beyond.

Before the drowning of the Pisces and since the independence of Morocco, alyah to Israel was prohibited but Jews could travel with their passports and go study in European universities. In Paris for example both Jewish and Muslim Moroccan students were housed together in Morocco House at the Sorbonne.

After the tragedy, things have changed. Yes, alyah was permitted (in groups, with collective laissez passer) but there were some harsh measures such as the "mobility restrictions", a euphemism to describe refusal of new travel documents as well as of passport prolongation for those Jews already abroad. To complicate things, the news of tragedy and hot discussions around it had poured ice on the relations between the students of both faiths.

The situation was the more tragic given the Ben Gurion government policy toward Moroccan alyah at the time.

To make a long story short, representatives were named among those already studying in Paris who in 1962 went to Israel to discuss our integration in Israeli universities with Israeli officials. It took them -believe it or not- two years of negociations with the Ben Gurion government and finally Moroccan Jewish students were granted scholarships for the two major universities, the Hebrew university and the Technion. I became one of the beneficiaries.

The "mobility restrictions" were lifted later on.

I must say Ben Gurion resigned in the summer of 1963. That may have been the reason.

Did Ben Gurion despise Moroccan jews? After all, he did actively bring in Jews from Yemen and iraq? Did he enjoy watching them put their lives in danger in leaky boats like the middle eastern and African migrants to Europe today?

Ben Gurion brought 97,000 Jews to Israel from Morocco on Operation Yakhin, the result of the Egoz tragedy, so you cannot reproach him for that. But the fate of a few Jewish students and intellectuals was different. Of course Israel government bureaucracy is notorious.


I don't want to get into his upsetting ramblings about MizrahiJews in general and Moroccan Jews in particular because as a Zionist I am ashamed of such blatant and repugnant prejudice. But if you read Hebrew you can google them.

What I described is a turning point because up till then there was a alya selection to meet the needs for menial work, and intellectuals and liberal professions were consistently refused on a medical pretext or another.

Bataween "just a few"? You've
never heard of it before but you know deep down there couldn't have been that many, right?