Context is key to Arab-Jewish relations

Important article by Gregg Roman in The Hill: the way to understand the Israeli Palestinian conflict is to restore the historical context of  Arab/Muslim colonisation and imperialism imposed on  indigenous peoples.

If one people violently conquered the territory of an indigenous people, forced them to declare allegiance to the conquering nation and creed at the point of a sword, foisted a culture, religion and language on the conquered people and treated those who refused as second-class citizens with far fewer rights, there would rightly be outcry, derision and, above all, condemnation.

If such actions are wrong and unconscionable in principle, it should not matter when they took place — whether it was a few decades or a number of centuries ago. Nevertheless, this principle is not accepted by the United Nations. In fact, it is turned on its head. 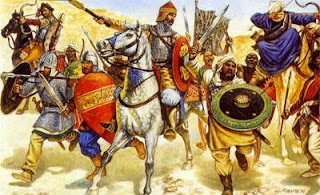 The Arab/Muslim conquerors imposed their language, culture and religion

Wherever Arab and Islamic rulers conquered, they imposed their culture, language and — most significantly — their religion.

At first, Arab settlers and conquerors did not want to intermingle with their indigenous vassals. They often lived in segregated quarters or created garrison towns from which they imposed their authority on native populations.

Over time, non-Arab converts to Islam were assimilated into Arab-Muslim society through tribal “clientage,” which Abd Al-Aziz Duri describes in The Historical Formation of the Arab Nation, as “help[ing] to promote both the spread of Arabic and the expansion of Arabisation,” while slavery became rampant and unfettered.

Slowly, but surely, the “Arab world” that we know today was artificially and aggressively imposed.

Ancient communities were destroyed, cultures suppressed and peoples were expelled. Jews, Christians and Zoroastrians were given the status of al-Dhimma, a people who were heavily oppressed and taxed under law, with few civil rights and constantly under threat of expulsion or annihilation in many parts of the region.

Even today, Arab elites refer to their origins in the Arabian Peninsula, and many villages and tribes across the Middle East keep lineage records to stress their origins far from where their families may have resided for generations.

In the Land of Israel, which was renamed Syria Palaestina after the Roman suppression and expulsion of the indigenous Jewish inhabitants in 135 CE, some Jewish communities remained on their lands and in their cities for hundreds of years. Even Arab writer Muqaddasi complained in 985 CE that “the Jews constitute the majority of Jerusalem's population.”


The Jews, the last people to hold sovereignty and independence in the land, were subsequently harassed and unequally treated by a series of Roman, Byzantine and Muslim conquerors, whether Fatimid, Ayyubid, Mamluk or Ottoman.


Read article in full
Posted by bataween at Sunday, January 08, 2017

Did you know that you can shorten your urls with AdFly and get money for every click on your shortened links.