In this must-read article in the Times of Israel, Dani Ishai Behan accuses Edward Said, the guru of 'post-colonialism', of failing to acknowledge that antisemitism is a variant of 'Orientalism', the title of his hugely influential eponymous book. Said cast Jews as 'Orientalists' themselves, whereas they have always been the victims of colonialism, both European and Muslim. 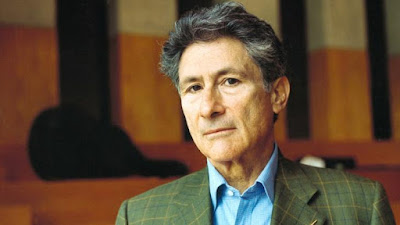 Said focused primarily on the Arab-Islamic world, but he also included the rest of the Middle East and Asia (barring one notable exception) in its ambit. Although he briefly touched upon the “similarities” between Western Jew-hatred and Orientalism, he refrained from acknowledging antisemitism as a variant thereof.

The reason why should be obvious to anyone familiar with his politics: recognizing Jews as a part of the Eastern ethnic/cultural fabric would have amounted to accepting our indigenous ties to Israel and, by extension, the validity of our claims to the land. Instead, he obnoxiously referred to Orientalism as “the Islamic branch of antisemitism”, thereby implicitly rejecting the indigeneity of Jews to Israel/Palestine and conceptualizing us as a European colonial imposition. In other words, he distorted a quintessential part of the problem that his book should have addressed, thereby making his book a narrow political tool rather than the honest academic endeavor that it is often considered to be.

Western antisemitism has always been animated in large part by what we now recognize as Orientalism, of which a direct line can be drawn from antiquity straight to the death factories of Nazi Germany, and living on in the 21st century under the guise of “anti-Zionism”, which Said himself promoted.


This brings us to the Zionist movement – the return of the Jewish diaspora to its native land. Realizing that no amount of assimilation or social mobility would end their persecution, Herzl and his followers endeavored to turn what had previously been nothing more than a farfetched dream into a reality: we would be repatriated to our country of origin and rebuild everything that we had lost. As a result, waves of Jewish olim left the diaspora and returned home, purchasing and cultivating unused land in what was then a sparsely populated, disease ridden province of the Ottoman Empire.

However, the Arab world, who had colonized the land of Israel centuries earlier and subjugated the remaining Jews under a system known as ‘dhimmitude’, violently resisted this movement. And as they came into contact with European colonial powers, they were exposed to European antisemitism as well. Whereas Arab Jew-hatred had hitherto been strictly theological, they began to absorb European Orientalist ideas about Jews (blood lust, backwardness, misanthropy, deceitfulness, conspiracy theories, etc), which still persist in Arab media and society. And in subsequent decades, these would be imported to the rest of the Muslim world, eventually making their way into the anti-Zionist movement we are now faced with.

How ironic that the world’s oldest victims of Western colonialism, a people that have suffered its effects longer than anyone else, are now being cast as “European colonizers” and “Orientalists” themselves. And by ironic, I really mean “disgusting, wretched, and heartless”. The rest of the world, rather than empathizing with our plight and addressing our needs as a people, has instead demanded of us the same thing that Westerners have been demanding of us for centuries: disappear.

This article argues that the philosophers Kant, Hegel and Voltaire hated Jews precisely as Orientals, and also concluded that Jews, as Orientals, could not produce reason, science or progress. Did Said know this, or if he knew it, did he care when writing up his own propagandistic claims?