Trained as a lawyer specializing in the rights of children,Yair Ronen is now a lecturer at Ben Gurion university. His work looks at how Israel's doctrinaire socialism 'secularised'  young Mizrahi immigrants from religious backgrounds. Jeremy Rosen explains in the Algemeiner: 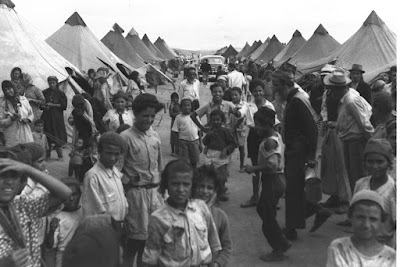 Ronen’s personal experience informs his work. He was born in Israel to Iranian Jewish parents. Like many immigrant families in the early years of Israel’s existence, he felt the prejudice of the European Ashkenazi Jews. The atmosphere in Israel in the first 30 years of the state was one in which the secular ideology of the elite looked down on religion and tried its best to impede or discourage it.
Ronen’s family moved to London for a few years, where he went to school. There he encountered a very different world, different ways of dealing with prejudice. Anglo Jews tended to suppress their issues with identity and the prevailing antisemitism. They were expected to play down Jewish identity in public. In some, this led to an aggressive reaction.

This is particularly relevant in Israel, to which well over a million Jewish refugees from Arab lands (and Iran - ed) came after 1948. Some were forced out of the countries where they had been living, others eagerly left persecution. Their culture was Arabic (Middle eastern - ed) as well as Jewish. Their music, literature, language, mentalities, values and passions were oriental, not occidental. They were more sympathetic to tradition than most Ashkenazi Jews. And they were made to feel less-than because of it.

The result was some disastrous social engineering. For example, in the early years, unaccompanied immigrant minors were sent to Youth Aliyah villages where they were denied religious services by the secular agencies for immigration. The religious parties protested and negotiated a deal whereby 25% of unaccompanied minors would be sent to religious absorption centers.

In 1958, after the religious quota had been filled, a boat arrived from Morocco with religious children. They were packed off to a secular Youth Aliyah center near Haifa. The yeshiva where I was studying had been alerted to their plight, and we were encouraged to visit the village in support of the children. We were refused entry. Through the wire fences we spoke to them. Some were crying because they were denied all religious services, and the staff were constantly upbraiding and teasing them for being old fashioned. There was nothing we could do. The religious parties had to stand by their agreement. Incidentally, this was the beginning of my distaste for religious party politics. But nothing could better illustrate the cultural imperialism of doctrinaire socialism.