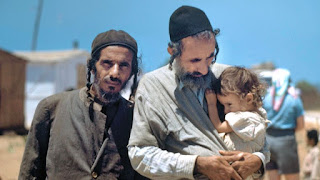 Yemenite Jews in a transit camp, 1950


The stories, heritage and history of Jews who immigrated to Israel from Arab lands and Spain will be documented as part of a new national project, approved Sunday by the Israeli cabinet. Haaretz reports:

The project will collect personal testimonies, both filmed and written, from Jews of Sephardi and Mizrahi origins, referring to Jews who were displaced from the Iberian Peninsula following the Spanish Inquisition, and those of Middle Eastern or North African descent.

The subjects will document their lives before they made aliyah, their situations when they left, fled or were expelled from their countries, and the tales of their absorption in Israel.

The Social Equality Ministry, headed by Minister Gila Gamliel, will allocate 10 million shekels ($2.6 million) to the project, which Gamliel initiated. “This is not a uniquely Mizrahi interest but a national, Jewish and Zionist interest,” she said, after the project was approved. “From now on, the Jewish story will be more complete and Israeli citizens young and old will get to hear, study and become familiar with both the Eastern and Western sides of the glorious heritage of the Jewish people.”

Posted by bataween at Wednesday, December 14, 2016