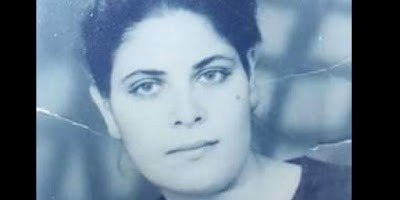 Only surviving photo of Liliane, who disappeared in the 1960s from Morocco.

Fadwa is a Muslim girl living in Casablanca. She has recently received the bombshell news that her mother's mother was a Jewess called Liliane. Liliane was last heard of in the 1960s, when she declared her intention to go to Israel and abandoned her baby (Fadwa's mother). Read her moving story on the Lesite. info website (with thanks; Michelle):

"Firstly, I call on all Jewish Moroccans because our grandmother is Jewish. I forgot to mention that our grandfather was Muslim and that we are also Muslim. I imagine that this difference in religion is one of the factors that made our grandmother disappear.

The story dates back almost 52 years, when my grandfather, Ahmed, met my grandmother Liliane, aged 20-22 at the time. That's all we know about her, we do not know her last name. In Casablanca, she lived in the mellah. He was a butcher in the neighborhood. He was already married and had children and yet they linked up. Obviously, Liliane's family always rejected him, I believe because of his religion.

Liliane became pregnant and had to leave her family to join Ahmed who took her to live with his wife and children. Ahmed's wife did not accept Liliane, but could not say anything in front of her husband, who was somewhat authoritarian, so she decided to put pressure on Liliane and try to drive her out of the house by any means she could. She succeeded.

Liliane had to endure this suffering during the nine months of her pregnancy and finally abandon her baby, who is my mother. Liliane had told someone, just before she left Ahmed's house, that she was going to Israel. She disappeared from that day forth in 1963-1964 and we have no news of her.

Our mother was raised by a couple who could not have children. At the time she tried to find her mother, but it was not easy because of the lack of means. Today, our mother is also the grandmother of five grandchildren, but we, her children, are hoping to find our grandmother, thanks to new technology.

Our mother does not know that we are aware of this story that she hid from us for more than thirty years. We learned about her from someone who wanted to shock us. But we accepted this truth and think that finding our grandmother would be the best gift we could offer to our dear mother."

If you know Liliane or have any information about her please contact me on bataween@gmail.com
Posted by bataween at Thursday, November 24, 2016

how did the grandmother Liliane disappear? Let's take into account what was done to Sol Hatuel, a young Jewess whom a Muslim supposed friend of hers reported as having converted to Islam and then backslid to Judaism. Since she refused to affirm that she had become a Muslim, she was executed by beheading. A painting of the beheading by the French painter Dehoncq [spelling?] is impressive in its depiction of the event. The event happened about 200 years ago in Morocco.

Given that background in Morocco, it seems likely to me that she told a Muslim of her intention to leave for Israel and was killed --some Muslims would say "rightly punished"-- for that reason.

This source mentions that Jewish mothers of infants from outside the Casablanca ghetto attended JDCnutrition cllasses and there were 58 such women http://search.archives.jdc.org/multimedia/Documents/NY_AR55-64/NY55-64_CR_004/NY55-64_CR_004_0819.pdf.
--malca