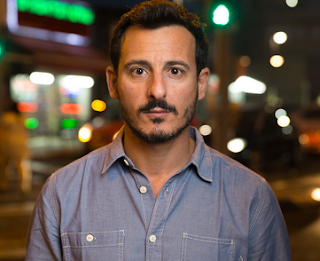 In an effort to shore up its dwindling support,  Peace Now has rebranded itself to appeal to Mizrahi voters - by naming as its new director a 'salt of the earth' Mizrahi. Avi Buskila (profiled in Ynet News) is also gay, which fits with being a man of the Left. But he parrots the specious wisdom that Mizrahim do not vote for Labour because they have been 'oppressed' by the Left. To state that Mizrahim identify with Arab Israelis and Palestinians could not be farther from the truth. Peace, he frankly admits, is 'wishful thinking'. This Mizrahi has not really thought things through. (With thanks: Sarah)

Buskila, who had already been a periphery and a gay-rights activist, began organizing a protest of independent reservists. At the same time, he also led, along with a friend, a project to create a treaty of teenagers for fair discourse in Israeli society. This was his rehabilitation after the war.

"I got my energy back and realized this was what I needed to be doing. A year later, Tzali Reshef (a founder of Peace Now) called me and said, 'We’re looking for a director, and a little bird told me you might be a good fit.’

"I had 15 minutes to think about it, and I decided to try. When they called to say I got the job, I felt it was the best compliment I ever got. I was given a chance to do something for the country."

But you didn’t grow up in Peace Now. You were brought in as "Mizrahi talent."

"They wanted to rebuild the organization. They interviewed a lot of people for the job. I am well versed in local politics, and my name is known in the center-left. In the interview, I was very clear about what Peace Now should do next. It should become a movement that speaks to the Israeli public. The logic behind this is that we have to expand the movement. I admit that it's easier to come and speak in certain places when your name is Avi Buskila. I get significantly less abuse.”

Why is it so difficult to speak to people? You offer peace. Isn’t that a good thing?

"The peace camp comes across as an elitist Ashkenazi camp. The entire left-wing leadership throughout the years has been Ashkenazi. (Former Mizrahi Labor Party leader) Amir Peretz is the exception. It makes sense for Mizrahim to hold left-wing views: They identify with minority, disenfranchised, Israeli Arab, and Palestinian rights. But that didn’t happen because the oppression of the Mizrahi population led to extreme alienation toward government. Likud doesn’t care about the development towns and the periphery, but the people who immigrated to Israel and were dumped in the periphery still vote emotionally. I tell them, ‘Peace has nothing to do with religion, identity, or nationality—it should be wishful thinking for a better future.'"

Aren’t you afraid that they hired you to be the left’s Miri Regev? The Mizrahi symbol?

"I don’t think of myself as a Mizrahi symbol. I am a person who happens to also be Mizrahi, raised in the periphery, and served in the army. There are a lot of people like me. But they are either not part of the left, or they didn’t choose politics as a way of making a difference. I don’t want to create another crisis between Ashkenazim and Mizrahim. I'm saying, we come with equal rights and the need to speak to those that the state abandoned.