Nadia Haroun's son 'comes out' as a Jew

Shock horror! The Egyptian film star Karim Kassem has revealed that his mother was Jewish. Although this press report in The Algemeiner does not say so, a little digging reveals that Kassem's mother was the late Nadia Haroun, sister of Magda, the leader of Cairo's tiny Jewish community, who continues their father Shehata's tradition of militant anti-Zionism. Kassem's 'coming out' seems to indicate two things: one, that it is more acceptable to vaunt one's Jewish connections in Egypt today. But it also shows that, in spite of his family's vehement protestations of patriotism (to the extent that Shehata let another daughter die rather than forfeit his Egyptian nationality) 'Jew' is still a source of shame and guilt, and Egyptians still conflate 'Jew' and 'Zionist'. (With thanks: Lily, Michelle) 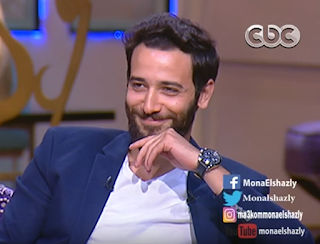 The film star Karim Kassem revealed that his mother was Jewish on an Egyptian TV show last week.

An Egyptian movie star revealed his Jewish ancestry on a live television talk show last week, much to the surprise of the program’s host and viewers, the London-based, English-language pan-Arab publication The New Arab reported on Tuesday.

According to the report, Karim Kassem said that though his father is a Muslim, his mother is a Jew, and one of his paternal grandparents was a Christian. As such, Kassem said, he learned from a young age to embrace all three monotheistic religions. “I feel as if I am lucky that I come from a mixed background,” he said, adding that growing up in an interfaith family has taught him about “accepting others.”

However, Kassem explained, this wasn’t always an easy feat. Indeed, he recounted, even the way he learned of his mother’s origin was shocking. It happened one day upon his return home from school, when he told his sister of certain negative stereotypes attributed to Jews. “Karim!” she shouted. “You don’t know? Your mom is Jewish!” It was not only his surprise that prompted him to keep the discovery to himself, he said. It was also his shame.

The 30-year-old was growing up in a country with rampant antisemitism and, in spite of its peace treaty with Israel, which did not view the Jewish state favorably. In fact, he said during the talk show interview, the reason his mother was among the few Jewish families in Egypt that did not immigrate to Israel after its establishment in 1948 was because of his maternal grandfather’s virulent anti-Zionism.

He even opposed the Camp David Accords, signed in 1978 between the late Egyptian President Anwar Sadat and Israeli Prime Minister Menachem Begin.

(According to the online magazine Cairoscene, realizing that he had caught the show’s host off guard, Kassem made a point of stressing that he is a true Egyptian patriot who continues to reject Zionism.)

Read  article in full
Posted by bataween at Sunday, November 27, 2016