Jewess: This is how I remember Baghdad 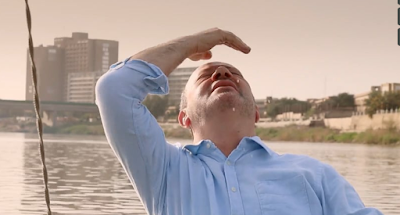 The film Remember Baghdad, which had its preview in London this week, is on course to be a very influential addition to the historiography of the Jews of Iraq.

Produced by David Dangoor, it tells the story of the last decades of the Jewish community of Baghdad in the words of a group of Jews who rebuilt their lives in London. Among them is Edwin Shuker (pictured here floating along the Tigris), one of the rare Jews to have maintained links with the land of his birth. Edwin  has made several trips to Iraq in spite of the security risks. The film opens with Edwin buying a house in Erbil (Kurdistan), an act symbolising the Jews' continuing sense of belonging to the country. More about this film soon. You can see a short clip here.

Seeing the trailer spurred Lisette S. to write down what she remembers of Baghdad. Lisette escaped Iraq in the 1970s and now lives in the West:

"Even in this trailer, you can actually catch a glimpse of the shores on the river where we lived; it took a glimpse of that river shore to awaken my nostalgia.


Many Jews lived on the riverside, especially on the Rissaffa bank. My maternal grandfather's house where I grew up, was one of them. It was right across from the Bilatt (the king's palace), .later to be the Ba'ath headquarters.

In summer, the land was so fertile that as soon as the tide was low, nomads would  construct  their temporary mud huts on the river banks and plant their vegetables  such as  cucumbers, green beans (loobia), green peppers, zucchini, tomatoes, eggplant,   etc.

They picked them early in the morning and rang our doorbells minutes later, to sell them to us. Yes, we always bought what they had!

We cooked our lunches  (the biggest meal of the day), according to the produce of that day.Those vegetables smelled divine, and were yummy even when raw !


I still remember sleeping on the roof at night under the stars and the moon, and seeing the flickering lights reflected on the water, whenever a boat lazily passed by. The  gentle ripples of the water would lull me to sleep!


Then there were those commercial airplanes sporadically passing by,  either landing or taking off from the airport across the river. We would see them while  we lay in bed on that roof.

Oh how I envied the passengers on those airplanes that were taking off, leaving Baghdad and heading to romantic Western shores.

How I envied the people who could travel unrestricted, for we were the pawns, we were  hostages in our own  birth country for no reason other than we were Jewish!"