Memories of Jews from Kirkuk and Mosul

Not all Jews living in northern Iraq were Kurdish - they did not  all speak the same language, dress the same way or share the same customs. Take for instance, the Turkmeni Jews of Kirkuk, who were different both from the Kurdish Jews and the Jews of Mosul. Mostly small-time merchants and shop-keepers, they spoke a dialect of Turkish and did not wear the traditional Kurdish outfit of baggy pantaloons. SGS, a keen reader of history,  recalls visiting the Jews of this region as a child. 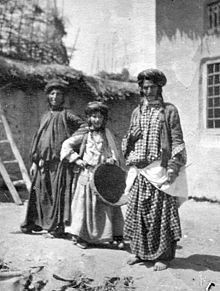 
"When I was about four years old, my late father took the family on a trip to Kirkuk and  Mosul. The Baghdadi railways were a novelty at that time. The line started in Baghdad and ended  in Kirkuk. The British Governor built this railway to Kirkuk after WWI after oil had been discovered.


We had to stay in Kirkuk for two nights until we could catch the bus to Mosul  because there was no railway to Mosul. In those days nothing was scheduled and a bus operator was ready to depart only after most of the seats on the vehicle had been filled. In Kirkuk, we spent the night in a sort of hotel called in the local language a khan, which means 'inn'. We were given a large room on the second floor. Based on the acceptable standards of those days, that inn was considered to be a five-star hotel. You could park  your car,  bus,  camel,  horse or donkey or mule. They all got good accommodation. The non-Jewish people of Kirkuk spoke Turkish, because this area was part of the Ottoman Empire before WWI. It was Mr. Churchill who decided to separate this district from the Ottoman Empire and make it part of a new country called "Iraq". The main reason is that this area is soaked in oil.
.
The Jews of Mosul were different from the Jews of Kirkuk and the Kurdish Jews. They also spoke a Judeo-Arabic dialect, but it was a bit different from that of the Jews of Baghdad. Both could communicate with some difficulties. The Jews of Mosul had a different accent and used different words  in everyday language. For example, they called tomato " franji" and beans they called "silahi".

The following day, we were invited to the house of a Jewish merchant who used to do business with my father. The Jews of Mosul lived mainly in a ghetto. This ghetto was fenced off. A few years before WWI , the Jews of Mosul were allowed to live outside this ghetto.

We were surprised by a story that our host told us. The Jews had lived in the ghetto for a long period. They were not allowed to have a cemetery and were forced to bury their dead in their basements, in their backyards and in the streets around their houses.

My mother was stunned to hear this. When I grew up, I wanted to research the reasons behind it. I found some interesting information. Iraq was captured by the Mongols under Genghis Khan. His son Hulagu took over. When Hulagu was gravely sick,  a Jewish doctor was brought over to treat him and he  recovered. Hulagu was pleased with his doctor and gave him the title Sa'ad Al-Dawla. He then appointed him as Prime Minister.

Sa'ad Al-Dawla was originally a Jew from Mosul. As Prime Minister he had to appoint district administrators to run the country. He could not trust people  he did not know and appointed Jews to high administrative positions. Among those appointed was the administrator of Mosul. This administrator appointed deputies from his own community. So Mosul was administered almost entirely by Jewish officials. This situation made Muslims very nervous. How could they  take orders from Jews ? It is not acceptable because they are superior and the Jews are dhimmis.

Sa'ad Al-Dawla was assassinated and the Mongols left Iraq. The situation in the whole country was chaotic. The Muslims of Mosul took advantage of this chaos, attacked the Jews and killed a large number of them in a pogrom that lasted several days. They then forced those who survived to live in a ghetto and did not allow them to have a cemetery, but to bury their dead as mentioned above.

The Jews of Mosul were  very nice, warm, and accommodating. We met two rabbis: I still remember their faces. Both  are of  blessed memory. One was Rabbi Yehia who was at that time in his  nineties with a white beard. He looked very majestic and he was respected by all. The second was Rabbi Moshe who was talkative and very eloquent. As guests, we liked them very much."