Marking the 60th anniversary of the Suez crisis 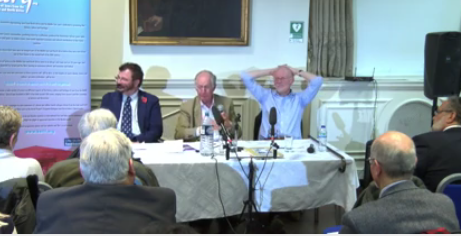 After years of fedayeen incursions, and in response to Egyptian President Nasser's closure of the Straits of Tiran, Israel invaded Egypt in late 1956 with British and French collusion.  Their aims were to regain Western control of the Suez Canal and to remove  Egyptian President Gamal Abdel Nasser from power.

After the fighting had started, political pressure from the US, the Soviet Union and the UN led  to a withdrawal by the three invaders. The episode humiliated Great Britain and France and strengthened Nasser. Israel took the political flak - but the real prize for Prime Minister Ben Gurion was the French quid-pro-quo: the transfer to Israel of French nuclear know-how.

What is considered an embarrassing episode for the western colonialists had far-reaching consequences for 25, 000 Jews living in Egypt. Their businesses were seized and many were given days to leave the country.

To mark the 60th anniversary of the Suez crisis, the Association of Jews from Egypt and Harif held a conference on 13 November in London.  Dr. Natan Aridan researcher at the Ben-Gurion Research Institute for the Study of Israel & Zionism, Ben-Gurion University of the Negev of the Negev, and Anthony Gorst, lecturer at the University of Westminster , made presentations to explain the lead-up to the crisis and the consequences for each country involved.

More about the Suez crisis and how it affected Egyptian Jews
Posted by bataween at Tuesday, November 15, 2016