Ali Shakir is an Iraqi-born architect based in New Zealand. His curiosity piqued by Shmuel Moreh's series of articles in Elaph (amazingly free of anger or blame),   he started a journey of discovery into the exodus of Jews from Iraq through literature. Article on MiddleEast.com: 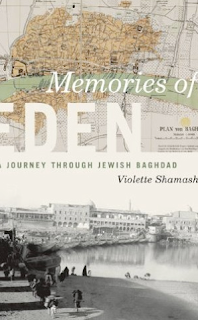 Memories of Eden: insight into the Farhud

Who would have thought?
At the age of ten, I took to the stage in my primary school in Baghdad to recite verses that called for an immediate liberation of Palestine’s land from the vicious Jewish occupation. My short poem was met with a roar of applause, I felt ecstatic. … Thirty-six years after what I’ve considered a glorious moment in my life; my comprehension of the notion of animosity has noticeably changed, and here I am, writing about Jewish writers and the injustice done to their people. But wait! Passports aside; the Jews I’m talking about are no less Iraqi than I am. They were born, grew up and studied in Baghdad just as I did, and we both migrated from Iraq—albeit in different times—when life there became unbearable for us and our families.

My first encounter with the plight of the Iraqi Jews was in 2007 when Saudi-owned, London-based news website Elaph ran a series of essays by Shmuel Moreh – professor emeritus in the Department for Arabic Language and Literature at the Hebrew University in Jerusalem. Reading the intimate recollection of stories on my laptop screen triggered memories of the beautiful villas I’d driven by on my way to the university. The British-colonial-style buildings, I was told, belonged to wealthy Jewish families, but were confiscated by the government after their owners had fled the country to Israel in the early 1950s.

Tormented by the past, struggling to adjust to an ever-changing, ever-challenging present; the fresh immigrant that I was at the time could relate to the nostalgia in professor Moreh’s pieces, but found them unrealistically sterile for a man who’d been wronged and forced off the land of his ancestors. How could there not be even a hint of anger or blame? I couldn’t understand. The stories, nonetheless, managed to pique my interest. I started looking for more information about what might have caused the mass migration of Jews from Mesopotamia; the land where they’d established their first diaspora community, following the Babylonian captivity.

Read article in full
Posted by bataween at Sunday, November 13, 2016

Well, would Elaph have published an article written by a Jew that contained anger or blame against any Arab state or government?

Nostalgia for the world of one's early years is a deeply ingrained trait of human nature. It is after all the time in our lives when we most actively receive and seek love and romance. Time filters out the bad experiences, feelings and emotions, leaving a rose-tinted residual memory that is often skewed even if not false. It is not for nothing that we are told that our childhood and youth is the best time of our lives.

Memoires such as those described here and in other posts in this blog are affecting and moving, and within their terms authentic, but they can be only a small part of any objective historical discourse.