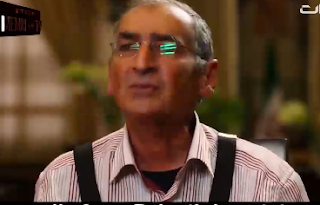 Iranian reformist intellectual Sadegh Zibakalam (pictured) has possibly risked arrest - and worse -  by defying  the Iranian regime's sworn objective, to destroy Israel, in this television interview. You can watch the MEMRI clip here.    (With thanks: Lily)

Iranian reformist intellectual Sadegh Zibakalam criticized the Iranian regime on its stance on Israel, saying that by promoting calls for the destruction of Israel, Iran was acting in violation of the U.N. Charter. He further criticized Khamenei's idea of a referendum on the future of Israel, saying that it was unrealistic and furthermore, none of Iran's business, pointing out that Iran's commitment to destroy Israel was evident in its parading of long-range missiles with slogans in Hebrew pronouncing that "Israel must be destroyed." Zibakalam was speaking in an interview held by the Iranian Ministry of Islamic Culture and posted on its official YouTube account on November 13.


Zibakalam: "The UN officially recognized Israel, and Iran is a member state. According to Article 1 of the UN charter, the UN member states must not conduct acts of aggression against one another, and must not wish death and destruction upon another nation.

"Iran should first withdraw from the UN before it may chant: 'Death to Israel' and 'Israel must be destroyed.'

"What Palestinian political movement calls for the destruction of Israel?"

Interviewer: "The Islamic Jihad and Hamas..."

Zibakalam: "Absolutely not. Hamas calls for a Palestinian state. Where does it call for Israel's destruction?

"Most of the Palestinians who became refugees in 1948, almost 70 years ago, are already dead, and some of them emigrated to Jordan, Armenia, or Ethiopia. There are already second- and third-generation (Palestinians) there. Are you really suggesting holding a referendum to determine if they should return to Palestine or not? How would they even identify them?

Interviewer: "Are you saying that we shouldn't care about this?"

Zibakalam: "No that's not what I'm saying. I'm talking about Iran's mission to destroy Israel, and about our declarations that we must destroy Israel..."

Interviewer: "We are not talking about destroying Israel with an atom bomb..."

Zibakalam: "Mr. Dehbashi, don't argue with me. Don't say: 'We're talking about a referendum, not about the destruction (of Israel). When you write on your missiles ' Israel must be destroyed,' it's no joke. These missiles have a range of 2, 000-3, 000 kilometers, so if you launch them from here, they will definitely hit Tel Aviv. You write 'Israel must be destroyed' on the missiles in Hebrew, in order to dispel any doubts (about our intentions). Is this really talking about human rights? Who entrusted Iran with this mission? The Arabs? Did the Arabs say: 'Oh Iran, we are incapable of destroying Israel, and, you know, we Arabs love you very much, so please come and do this for us'?! Did the Palestinians say this? Did Hamas? Did the PLO? Did the Palestinian parliament in exile say this? Is this written in our constitution? Was there a poll in which the Iranian people said that Israel must be destroyed? Does Islam say this? Who said that we must destroy Israel?!

"There is a practical reason why they do not arrest me. They say to themselves: Why arrest him? We can just call him and tell him to shut up, and he won't utter another word.