Forgotten refugees must be part of the equation

South Florida has a growing community of Sephardi and Mizrahi Jews fleeing antisemitism, some for the second or third time. Lior Haiat and Henry Green explain in the Miami Herald why the forgotten refugees from the Middle East and North Africa must be part of the equation in any peace negotiations (with thanks:Michelle): 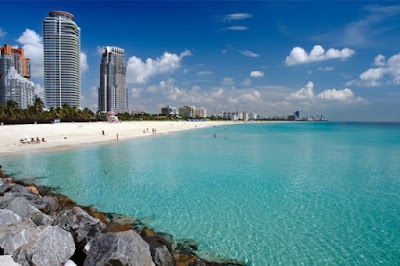 Miami beach has a growing Mizrahi community
For centuries Jews co-existed for the most part peacefully with their various neighbors across North Africa and the Middle East. Jewish communities thrived from the Atlantic Ocean to the Tigris and Euphrates rivers, from Casablanca to Alexandria and Baghdad.

Today, they all have been virtually driven to extinction. Within one generation, from 1948 to 1973, nearly 1 million people were displaced, many becoming refugees.

In the wake of the Holocaust, the establishment of the state of Israel and the rise of Arab nationalism, the Sephardi/Mizrahi Jews in North Africa and the Middle East were increasingly subjected to pogroms, riots, arrest and detention. They were caught between the colonizers and the colonized. But unlike other ethnic groups, the Jews was viewed as a “fifth column.”

Jews were stripped of their citizenship, belongings and livelihoods. Communal life was restricted, schools and synagogues confiscated and cemeteries destroyed for urban renewal. In 1969, during the regime of Saddam Hussein, innocent Jews were scapegoated as Israeli spies and hanged in a public square.

Nearly half of those displaced migrated to Israel, about a quarter to Europe and the rest to the Americas. Many experienced several exiles. For example, the Garazi family, fearing rising anti-Jewish sympathies in the wake of the fall of the Ottoman Empire, traveled from Aleppo to Havana and then to Miami post-Castro in 1961. When Solomon was asked if his roots still played a significant role in his life he said: “It is who I am: a proud Jew from Aleppo who left his heart in Havana to go into exile again to be free so I could continue to cultivate my Sephardi heritage”.

The Diaine family fled Algiers in the face of the Algerian Revolution in 1962 and migrated to Paris, only to leave for Miami in fear of the growing anti-Semitism before the Charlie Hebdo massacre. “The feeling is there’s something wrong going on in Europe,” Elisa Diaine said. “The extreme right is rising and, unfortunately, the first to be scapegoats are always the Jews.”

Today, South Florida is home to thousands of Sephardi and Mizrahi Jews of Middle Eastern and North African heritage. It is a melting pot of communities and multiculturalism, a haven for refugees of all nations and ethnicities.

The story of the “forgotten exodus,” Jewish refugees from Arab and Muslim countries, has never been part of the discussion regarding Palestinian-Israeli and Arab-Israeli encounters for peace. With each attempt to rewrite history, the voices of these Jewish refugees grow weaker, as witnesses pass on and human-rights agencies exclude them from the equation of justice.

Read article in full
Posted by bataween at Tuesday, November 29, 2016

That opening about co-exiisting peacefully for the most part is one of the myths that Arab and Leftistist allies routinely haul out. My investigation into the history of Jews in the Magreb and Middle East tells a very different story of routine discrimination, humiliation and massacre. One could say that in-between the Pogroms and the Holocaust Jews in Europe co existed peacefully with their neighbors.

off topic//
Bnai Brith Canada publishes on line a series on Jews in Arab lands and their persecution and expulsion:
http://www.bnaibrith.ca/b_nai_brith_canada_launches_series_in_tribute_to_jews_from_arab_lands