Events kick off to mark exodus from Arab lands

Jewish organisations around the world  are getting ready to hold special events to mark the exodus of Jewish refugees from Arab countries and Iran in the last 70 years. The centrepiece of the commemoration in Israel will be a musical extravaganza attended by 2,700 people at Binyanei Ha'uma in Jerusalem on 30 November.

At Bar Ilan university today, minister Gila Gamliel will open a conference attended by all the organisations representing Jews from Arab countries in Israel. The conference has been arranged by Dr Shimon Ohayon, ex-MK, who shepherded the law designating 30 November as Jewish Refugee Day through the Knesset.

The commemoration kicked off on 24 November when Levana Zamir, president of the Coalition of Associations of Jews from Arab countries, presented an award  to minister Gila Gamliel before an audience of 250 guests.

The award was in recognition  of minister Gamliel's remarkable contribution to raising awareness of the expulsion and plight of Jews from Arab countries. 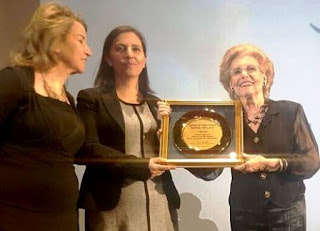 Miriam Avigal-Guez, representing Jews of Tunisia, looks on as minister Gila Gamliel (centre) poses with the award presented to her by Levana Zamir right).

The program  on the "Jewish Nakba"( arrests, progroms, properties confiscated, persecution and expulsion of Jews from Arab countries) included documentaries and a lecture by Professor Uzi Arad, initiator and head of the famous Herzliya Conference, and professor at the Interdisciplinary Center, who served during 2009 -2011 as National Security advisor to Prime Minister Binyamin Netanyahu. Arad made the issue  of Jewish refugees a strategic imperative. MK Ksenia Svetlova made the opening remarks.

Gamliel, who was on her way to the north of Israel, could not avoid mentioning the criminal fires devastating Haifa and its suburbs.

With reference to the Jewish 'Nakba', minister Gamliel stressed how important it is to record testimonies. She is working on getting a special budget for this task.

Harif, the UK Association of Jews  from the Middle East and North Africa, will be screening 'Rock in the Red Zone' jointly with the Israeli embassy on 30 November, while JIMENA in California has a full month's programme planned.

Jewish organisations, many in partnership with Israeli embassies, will be holding talks, film screenings and discussions from Amsterdam to Sydney, Toronto to Bologna, Birmingham to New York, Washington to Montreal.