November 1956 was the time  when Israel colluded with Britain and France to mount the Sinai campaign. In a daring, complicated rescue mission, Avraham Dar, a Mossad agent who had established the cell which carried out the bombings known as the Lavon Affair, planned to rescue Jews from Port Said and bring them to Israel. Israeli navy boats disguised as Italian fishing vessels were dispatched to Egypt, together with three Israelis dressed as French soldiers. They managed to rescue 67 Jews. Israel Hayom has the exciting story, as told by Dar. (With thanks: Yoel, Lily) 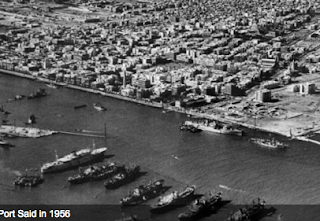 At the entrance to the city we left him [the French officer]. We kept our weapons. And to get to the Jewish quarter, we walked around liquor stores and I would present us as French soldiers who were looking for drinks or as news photographers covering the war who wanted to document the horrors perpetrated by the English. We told them that we had lost our cameras."

Within a few moments, Dar says, they were surrounded by an excited mob of Arabs, who claimed that the British were terrorizing the city.

"I told the Arabs: 'You're complaining about how the English are treating you? You took part in the horrors and killed the Jews of the city.' They answered: 'No, we didn't, the Jews are alive. We'll take you to them,'" Dar says.

The Arab guides led the trio the Jewish Quarter.

"We saw the synagogue still standing, surrounded by destroyed homes. Suddenly, two guys appeared who said they were Jews. We told them that we were Jews serving in the French army, and that we wanted to know what had happened to the Jewish community so we could help them."

One of the two was Eli Mayo, the son of Shmuel Mayo, the community leader.
Mayo, who today lives in Azur, east of Tel Aviv, remembers his Egyptian childhood as "wonderful," at least until 1948.

"My father owned a large shop and was one of the most respected men in the city. He was sometimes invited to events at the home of the governor of Egypt," he recalls.

"My best friend was a Muslim named Jamal. Our families got along well. But when the War of Independence broke out, Jamal was the first to throw rocks at my house and shout, 'Death to the Jews.'"

Mayo remembers that "on the evening Israel was founded, people from the Egyptian Bureau of Investigation came and arrested my older brother, Yitzhak, accusing him of spying and other things. We didn't know where he was taken and couldn't find out. Dad pulled strings through Coptic Christian officers, and after he paid bribe money we managed to get to Yitzhak in prison. I would bring my brother and other Jewish prisoners food in the morning and the evening.

"After the War of Independence, life in the city was tough. We had money, we were business owners, but the Arabs abused us. They threw rocks at us in the street. In those years, I worked at a branch of Barclays Bank, and because I passed mosques on my way home, I would work late on Fridays, waiting until the [Muslims] were done praying, and only then go home. The Jewish community was forced to bribe the police so it would protect us," Mayo says.

Read article in full
Posted by bataween at Sunday, November 06, 2016