A rebuttal to the NYT's hatchet-job on Miri Regev

A 6,000-word screed in The New York Times profiling Israel's culture minister Miri Regev portrayed her as a female Donald Trump. But Regev does not represent the far right, but the sensible mainstream, argues Lyn Julius in The Times of Israel. Blogger First One through (below) takes issue with the NYT's assertion that Jews from Arab countries 'simply immigrated'.

Anyone who follows the news about Israel in the western media could not have failed to notice a feature about Israel’s culture minister Miri Regev (pictured) in the New York Times magazine recently. 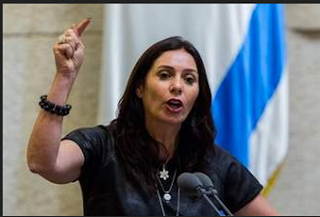 Regev’s profile by Ruth Margalit ran to 6,000 words and pulled no punches: despite her personal warmth and underneath her blood-red lipstick, Miri Regev is a female Donald Trump — vulgar, populist, bigoted. The article’s title: ‘Israel’s culture commissar’ left no doubt that Regev was not interested in promoting culture – rather, she was in place to censor it.

Among such acts of stalinism is her walk-out in protest at the rap of a poem by the anti-Zionist Palestinian Mohammed Darwish. She has threatened to cut funding to Israel’s film industry, with its penchant for producing pro-Palestinian, or even anti-Zionist films.

So far has the NYT, dubbed 'Pravda on the Hudson', moved to the anti-Zionist left, that what the NYT deems Regev’s ‘McCarthyist’ attacks on ‘freedom of speech’ are in fact a mainstream position in Israel.

Regev has declared a cultural war against Israel’s Tel Aviv elite. Their output does not reflect the ‘low-brow’ culture of half of Israel’s population, those Israelis who hail from Arab and Muslim countries and were resettled in Israel’s border towns in the 1950s and 60s. Traditionally, the culture of the ‘peripheria’ has attracted a fraction of the public finds allocated to cultural projects. Regev, who boasts that she has never read Chekhov, is determined to change all that.

The far left, personified by Ms Margalit, has never been shy to push a narrative of ‘discrimination’ by Israel’s Ashkenazi establishment against the more disadvantaged Mizrahim. But now Mizrahim – and particularly Mizrahi women – occupy prominent posts in the Netanyahu government. There is Gila Gamliel, of Yemeni and Libyan parentage, Tsipi Hotovely, of Georgian heritage, Ayelet Shaked, who is half-Iraqi, and Miri Regev herself, whose parents come from Morocco.

Barely noticed by the western media, the Mizrahim are now the Israeli establishment. In deploring Regev’s broadsides against Israel’s European cultural elitists, the irony is that the NYT is ranging itself on the side the elitists.

The NYT mis-describes Regev’s family as immigrants, not refugees from Arab antisemitism. Margalit’s article makes no attempt to understand how Regev’s background has shaped her political views.

As one commenter on the NYT thread put it: “It’s the Ashkenazi wealthy elite – the arbiters of culture and what should be proper politics and thought – that are the ones who are most contemptuous of the poorer Mizrahim, but the same sector is always ready to excuse Palestinian behavior and terror while blaming their own country for everything and anything, an exercise in Left self-flagellation… just before they go back to their expensive high-rise Tel Aviv condos.”

For Israel’s left, it is a bitter pill to swallow that an alliance of Mizrahi voters and hawkish Soviet immigrants has ensured, now and in the future, that the old Labor and leftist parties should remain in the wilderness. And that’s probably the real reason for Margalit’s bitter hatchet-job in the New York Times.

Critique by blogger First one through: The Mizrahim were not immigrants, as per the NYT, they were refugees.
Posted by bataween at Tuesday, November 01, 2016

The father of Ruth Margalit is Prof Avishai Margalit, an extreme member of what I call the Israeli anti-national camp, usually labeled "the Israel Left." Consider his background [wiki]:

"Margalit was among the founders of the "Moked" political party in 1973 and contributed to the writing of its platform. In 1975 he participated in the founding of the Israeli Council for Israeli-Palestinian Peace, and in 1978 he belonged to the first group of leaders of Peace Now. [4] In addition, in the 1990s Margalit served on the board of B'Tselem, the Israeli Information Center for Human Rights in the Occupied Territories."

As to his daughter, Ruth, they say that the acorn does not fall far from the tree.