The good news for 'normalisation' is that Moroccan journalists have visited Israel. The bad news is that they are too intimidated to admit it. Ynet News reports: 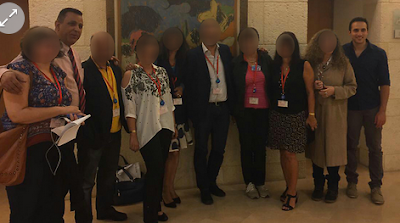 The Moroccan journalists did not want their identities revealed

A delegation of seven leading Moroccan journalists is currently being hosted by the Israeli foreign ministry with the aim of enabling the participants to view first-hand the situation in Israel and to shatter negative myths associated with the country’s image.

As part of the visit which is taking place despite the absence of any official relations between the two counties, the journalists, comprising five women and two men, will receive political and military briefings, meet with ministers, MKs and senior officials from the Supreme Court and will also partake in a tour of the Gaza border.

In a conversation with Ynet, one of the delegation members from a prominent Moroccan newspaper explained the climate of fear and propaganda which has hitherto precluded the possibility of such a visit from coming to fruition.


In 2009, she said, she received an invitation to visit Israel as part of Euro-Mediterranean Youth Forum but felt pressured to decline the offer.

“I was extremely afraid of coming. We are under pressure from the Arab media, religious people and propaganda about the Palestinian issue,” the journalist confessed.

Posted by bataween at Wednesday, November 09, 2016