450 Jews have left Turkey this year 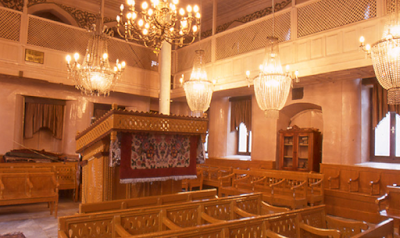 Interior of the Ahrida synagogue, Istanbul

Robert Jones in the Algemeiner confirms that the decline of the Turkish Jewish community continues apace: 450 have left, mostly young people.

“Due to deaths and emigration, there are now 450 fewer Jews [in Turkey] this year,” wrote Mois Gabay, a columnist for the Turkish-Jewish weekly, Salom.
This, he said, is not only because the community is aging and has a decreasing birthrate, but as a result of “the traumas that every Jewish generation has endured” in the country.

“Our community has got even more uneasy due to the terror attacks to which they are exposed every 10 years and has been suffering due to the rising antisemitism,” he wrote. “Add to that the economic circumstances that are getting even more difficult, and a considerable section of our community is looking to raise their children in a different country. Thus, most of this year’s emigrants have been young people.”

Polls back this up. For example, a survey conducted by Istanbul’s Bahcesehir University in April/May 2009 showed that 64 percent of Turks did not want Jewish neighbors. And, according to the 2015 Anti-Defamation League Global 100 poll, 71% of the Turkish adult population harbors antisemitic attitudes.

The rise of militant Islamist groups in the region is another factor. According to a Sky News report in March, ISIS terrorists were planning an attack on Turkish-Jewish kindergartens, schools and a synagogue that doubles as a community center.

As if all of the above were not enough, the antisemitic outbursts from many Turkish politicians and journalists are making life even harder for the country’s Jews.

Read article in full
Posted by bataween at Sunday, November 06, 2016

The photo taken is Yambol Synagogue not Ahrida