Why Jew-hatred is at the centre of Islamism

The extermination of the Jews became the centrepiece of jihadist ideology in the 1930s and 40s.  Haj Amin-al-Husseini, The Mufti of Jerusalem, was the lynchpin connecting Nazis, Jihadists and Jew-hatred. Important ISGAP piece by Professor David Patterson: 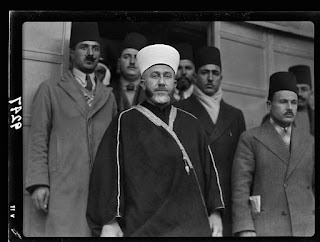 The Mufti: lynchpin between Nazism, Jihad and Jew-hatred

With onset of the war in Europe the Brotherhood became even more avid supporters of the Nazis. By 1945 they had become a hybrid of Nazism and Islam to form Islamic Jihadism, making the extermination of the Jews not just a political or territorial aim but a defining element of their worldview: one cannot be part of the Brotherhood or any other Islamic Jihadist group, just as one cannot be a Nazi, without espousing the extermination of the Jews. When on 20 June 1946 King Farouk granted asylum to al-Husseini, now wanted as a Nazi war criminal, al-Banna (founder of the Muslim Brotherhood - ed) applauded the decision, declaring that “in Berlin he [al-Husseini] had been purely and simply carrying out jihad [just as the Nazis had done].”[3] The Mufti thus became a source of inspiration to the Jihadists for his devotion to the Nazis’ extermination of the Jews. In al-Husseini, then, we have an important key to the connections that bind together Nazis, Jihadists, and Jew hatred.

On 8 May 1921 British Mandate Governor Herbert Samuel appointed Haj Amin al-Husseini Grand Mufti of Jerusalem. Two months after Hitler’s appointment as Chancellor of Germany on 30 January 1933 al-Husseini had his first meeting with German General Consul Heinrich Wolff in Jerusalem. Al-Husseini’s Arab Revolt “took place against the background of the swastika: Arab leaflets and signs on walls were prominently marked with this Nazi symbol; youth organizations… paraded as ‘Nazi-scouts,’ and Arab children greeted each other with the Nazi salute.”[4]

On 2 October 1937 al-Husseini met with Adolf Eichmann in Palestine. On 13 October, he fled Palestine, wanted for inciting insurrection against the British Mandate government. Two years later, now on the payroll of Nazi Germany, he set up his base of operations in Baghdad. In a memorandum dated 5 February 1941 the Wehrmacht High Command assured al-Husseini that Germany could promise “everything they [the Arabs] wanted on ‘the solution of the Jewish question in Palestine.’”[5]

On 3 April 1941 al-Husseini orchestrated a Nazi-backed coup against the Iraqi government, whereupon he incited the slaughter of 600 Jews in Baghdad; 911 houses were destroyed and 586 businesses ransacked.[6] The coup failed, however, and a few weeks later the Mufti turned up in Berlin.

After his initial meeting with the Führer on 28 November 1941, he recorded in his diary Hitler’s insistence that the Nazis and the Arabs are engaged in the same struggle, namely, to exterminate the Jews.[7] The Nazis gave al-Hussein six radio stations to spread their propaganda to the Arab world. In his broadcasts he repeatedly urged Muslims to kill Jews everywhere. On 11 December 1942 he issued a call to “martyrdom” as allies with Germany in the war against the English and the Jews. “The spilled blood of martyrs,” he cried, “is the water of life.” And: If England and her allies should win the war, “Israel would rule the whole world”; if the Nazis should win, “the Jewish danger” would be defeated.[8]

Of course, he did more than radio broadcasts: as early as January 1941 al-Husseini had gone to Bosnia to convince Muslim leaders that a Muslim SS division would bring glory to Islam. Dalin and Rothman estimate that he recruited as many as 100, 000 Muslims to fight for the Nazis.[9] The largest of the Muslim killing units was the 13th Handschar Division of 21,065 men. They went into action in February 1944.[10] After the war “his association with the Axis had enhanced rather than shattered his halo” in the Muslim world.[11] In 1946 he embraced Yasser Arafat, future head of the PLO, as his protégé and brought in a former Nazi officer for Arafat’s military training.

Read article in full
Posted by bataween at Thursday, October 13, 2016

The principal contact between the Western agents and the Muslim Brotherhood was Said Ramadan, a prominent "brother" who had fled from Egypt to Europe in the 1950s and went on to write a classic work on Islamic law. In 1953 he even met with President Dwight Eisenhower at the White House. A CIA analyst wrote: "Ramadan seems to be a Fascist, interested in the grouping of individuals for power." It was an astute reading of the man and his organization. It was also ignored. Though the CIA files for this period are closed and Mr. Johnson can't say "definitively" whether Ramadan was on the agency's payroll, the U.S., he claims, used "financial and political leverage to give the Brotherhood's man in Europe a leg up."


The mosque in the title of Mr. Johnson's book is the Islamic Center of Munich. It was founded in 1958 and became a hub of radical Islam in Europe. As Mr. Johnson tells it, American and German governments and several prominent Muslims brought the center to life and competed to control it, playing each off against the other. As Germany and America lost interest, the Muslim Brotherhood emerged triumphant, and Munich turned into a Continental mecca for Muslim activists. The Brotherhood's recently retired "supreme guide," Mahdy Akef, ran the center in the 1980s and, writes Mr. Johnson, "helped drive an unprecedented surge in the organizing of Islam throughout Europe." A planner of the World Trade Center bombing in 1993, Mahmoud Abouhalima, frequented the mosque. German terrorist investigators have raided the mosque in more recent years, but never pressed charges.

The article mistakenly says that Husseini went to Bosnia in January 1941. But this is likely a mistake for January 1942.

Said Ramadan is the father of Tariq Ramadan the bane of honest discourse about Islam in Europe. Said was also it seems the son in law of Hassan al-Banna.

Correct me, Is he the man working with M16?

Just to add to these stories of Imam with Tyranny.

Can any one Imagen A dictator or tyrant like Hitler or Mussolini or Stalin or Saddam listen and work with another religious man different from his religion (Saddam an exception, he was not believer or religious)

Hitler was an admirer of the Islamic religion. See here: