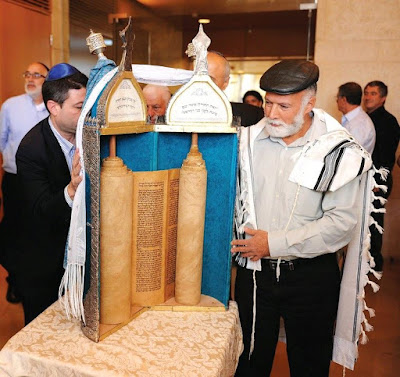 This Torah scroll from Iraq was rededicated in 2015 (photo: MFA)

The Jerusalem Post reveals the unbelievable tales of Torah scrolls smuggled out of places hostile to Jews. It mentions two scrolls taken out of Iraq and one from Yemen in recent times. (with thanks: Lily)

The Torah scroll being used by Israel’s diplomats is one that enraged another country – Iraq. Last year, the Foreign Ministry dedicated a Torah for use at its office synagogue in Jerusalem, that was smuggled out of Baghdad.

The scroll, estimated to be 150 to 200 years old, is believed to be from the region of Kurdistan. When most of the country’s Jews fled to Israel after 1948, the scroll was left behind.

The Iraqi government banned them from taking their property and seized assets from those who left.

In November 2013, Amnon Israel, the new manager of storage and supplies for the ministry, noticed the scroll in a storage room on his first day. He sought out an expert in Torah restoration, and after six months of work it was ready for use. The government selected a case for the scroll that originally belonged to the Jewish community of Aleppo, Syria, and was itself over 100 years old. The special dedication at the Foreign Ministry took place in January 2015 in front of Sephardi Chief Rabbi Yitzhak Yosef, and then-foreign minister Avigdor Liberman.

Nineeteen Jews brought to Israel from  Yemen
Posted by bataween at Friday, October 28, 2016