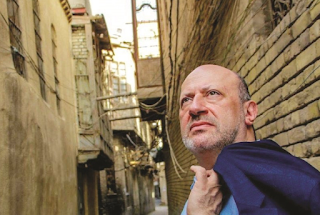 Edwin Shuker on a visit to Baghdad

An Iraqi Jew's three-minute video message (scroll down to 2 October post) wishing Muslims a Happy New Year and appealing to Iraqis to safeguard their Jewish heritage has garnered hundreds of thousands of views.

Following his appeal in classical Arabic,  Edwin Shuker, an Iraqi-born Jewish businessman living in London,  received an offer from the leader of the most important of Sunni tribes to work with Jews.

After consulting with Muslim acquaintances, Shuker decided to make his video appeal when he discovered that the Muslim New Year 1438 coincided with the Jewish New Year 5777.  He uploaded the video to his Facebook page and was astonished at its impact. "Every morning I wake up to another few thousand views," he told Jack Hugi of Maariv newspaper.

Spurred by news that the home of Sir Sasson Heskel, Iraq's first finance minister, had been destroyed, Shuker aimed to alert the authorities to the neglected state of Iraq's Jewish sites and  holy places. (It later transpired that Heskel owned two homes, and the building that had been demolished was not the so-called House of Dreams, his main place of residence.)

"We left Iraq by force, but Iraq has never left our hearts for a single moment," Shuker began his  appeal. "I do indeed express here my personal opinion, but I am sure that the words express the affection of the members of my community and longing for the homeland and for its rebuilding.  This community lived more than 2, 600 years on this soil  and has contributed greatly to the culture. But this community recently fell victim to the policy of division and sectarianism. It hurts to see this rich social fabric, a colourful carpet, threatened by the loss of its diversity. "

Hundreds of responses poured in to Shuker's video. Individuals as well as officials , all of them in Iraq, thanked him warmly and wished to renew ties with the Jewish diaspora: "You Jews, come back and help us rebuild our destroyed country," said one message.

"God curse the people who caused you to emigrate, you are part of us," wrote a surfer from the city of Karbala. " We have not forgotten you, nor forget. Give my greetings to all Iraqi Jews."

A Shi'ite cleric  wrote: "I am very interested in and insist on the return of Iraqis, especially the Jews, who represent a rich diversity of Iraqi society".

The most important message was from a Sunni Sheikh who offered to cooperate  and make further contacts with Jews. "Great people are the ones who make history," he wrote. "I notice that you are you a patriot ... I am willing to go out on this mission with you and to send a message of affection, cooperation, tolerance and a handshake without hesitation or fear. "

Shuker is especially excited by this approach. This was an explicit bid,  at a senior level, to renew the relationship between the Jews of Babylon to their homeland.  Despite that, in the 13 years since the fall of Saddam Hussein, he has made several visits to his homeland.

"A revolution takes place before our eyes," he told Maariv. "It is important for the current generation to hear the Jewish voice, which they have not heard for 50 years at least. Today they appreciate  how important Jews were in the Arab world."

"Some of them are telling us: If you were here, maybe everything would be different.We do not come with demands of the restitution of our rights, but to say: you are our brothers, and the problem is for all of us, so let's solve it together. We were there for over two thousand years, we drank together from the Tigris and Euphrates, we ate typical Iraqi dishes with you and now we ask you will protect all holy sites, not only of Jews, but also Christians, Yazidis and others. I want to bring my son and grandson and great-grandson to Iraq and show them what a glorious civilization existed there. "