Syrian Jews: "suddenly, you leave everything behind."

It's a hair-raising tale of escape, fraught with danger, but Jews from Syria and Iraq were so desperate to leave in the 1970s and 80s that they were prepared to trust their lives to smugglers. Two brothers, born in Damascus, who later had successful careers in Israeli military intelligence, tell Israel Hayom their story. (With thanks: Lily)

Jewish Agency representatives equipped the father will all the documents he would be required to show to Syrian intelligence officials about his European vacation and sent him back with the guarantee that a few days later, an agent would come to his house and smuggle him and his family out of Syria.

As a way of identifying the agent, the Jewish Agency people took a Syrian coin, which had three holes, and tore a banknote in two, half of which they gave the father, and the other half of which they stuck into one of the holes in the coin. "

When he returned home, he didn't tell anyone about his plans. There were plenty of Jews at the synagogue who informed to the regime in exchange for protection of one kind or another, so only his two other brothers, who wanted to make aliyah, were privy to the secret," M. says.

But a few weeks after their father returned to Syria, the First Lebanon War broke out, and the plan was shelved. The agent never arrived, and the father put his dream aside and went on with his life.

But three years later, a man entered his shop and asked the father for a glass of water. When he received it, he presented the coin with the half-banknote in it to the astonished father. "He asked the agent, 'When?' and he answered 'Tomorrow morning.'

In the meantime, one of the brothers had gotten engaged, and they had both opened a successful business together, so he asked [the agent] for a few hours to talk to his brothers, and they agreed to meet again that evening," A. says. Running around crazed, the father asked his brothers if the plan was still on. 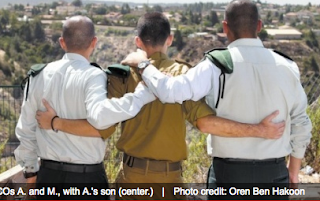 "They didn't hesitate for a second and told him this was their only chance. You have to understand that it was a very dangerous scheme, with an unknown outcome, and that other than the dream, no one really knew what awaited them in Israel. He didn't want them to blame him if something went wrong. 'It's their choice,' he said, but they insisted it was what they wanted."

The agent was actually a local collaborator who knew the smuggling routes to the border with Israel and life out in the open. Three days after the meeting in the shop, on Tisha B'Av 1985, A. and M., their father and mother, their uncles, and the fiancée and her uncle set out for a bordering country, from which they would continue on to Israel. The family told their relatives that they were headed for the resort town of Latakia. So as not to arouse suspicion, each brother left from a different point in the city.

"Since it was a total secret, [our father] didn't tell us and his brothers didn't tell the fiancée," A. says. "One word out of place, and it would have put all our lives in danger. But I -- a 15-year-old -- knew. I felt the excitement in the air. I saw my father talking with my mother and even though I didn't hear what they were saying, I saw my mother packing food and when I left school, I knew that it was for the last time. I was euphoric, like the moment I'd been waiting for my whole life was finally here.

When we left, my father bid his employees goodbye and said he would see them a few days later. That's how careful he had to be. Suddenly, out of the blue, you leave everything behind. Your business, your property, your house, your friends, and your family. Everything you built in your life, and go out to build a new life," A. remembers.

Email ThisBlogThis!Share to TwitterShare to FacebookShare to Pinterest
Labels: Jews of Syria, Testimonies