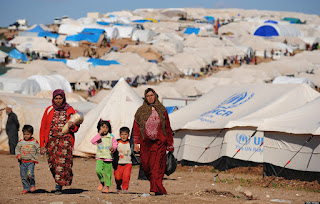 A UN-run camp for Syrian refugees: minorities avoid them for fear of persecution

A Syrian child refugee with 'Jewish heritage' has arrived in the UK, reported this week's Jewish News. The unidentified English-speaking boy said that his Jewish heritage was 'important' to him. A Jewish foster family is being sought for him.

Such reports surface from time to time and must be treated with scepticism:  the known Jewish community in Syria numbers less than 20 people and there are no children among them.

In August, a report that three Syrian-Jewish families had escaped to Sweden posing as Christians and had finally joined a Louisville Jewish congregation in the US was denied by community leaders.

A young man claiming to be of Jewish descent was profiled in a Swedish newspaper, but the presence of his family members in Lebanon and his stated aim to return to Syria to rebuild the country casts doubt on how genuine he is.

While it is possible that there are Syrian families of mixed parentage it is unlikely that refugees identifying as Jewish would have left Syria with the great mass of Muslim refugees. Christian and Yazidi refugees avoid the main camps for fear of persecution by Muslims.

The individuals themselves may feel that they have a better chance of being given asylum in the West if they claim to be Jewish.
Posted by bataween at Sunday, October 30, 2016

write my paper for me said...

I really liked your article and the photo is super. Thanks you.

how to write a scholarship essay said...

Thanks for this information, I think it will come in handy in the future.