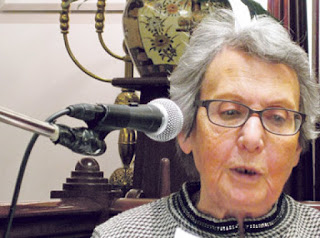 The death on 24 October has been announced of Sylvia Kedourie, 90, wife of the late LSE Professor of Political Science Elie Kedourie.

Although frail she remained active and alert until the last, passing away barely six days after the 2016 British Academy Elie Kedourie lecture in memory of her illustrious husband, whom an Independent obituary called 'the most profound historian of our age.' She was too frail to attend.

Sylvia G Haim was more than just a wife and mother to their three children. She was an influential academic and author in her own right. She collaborated with Professor Kedourie on several works and edited Arab Nationalism: an Anthology.

It was a marriage of soulmates who shared a passionate interest in the politics of the Middle East. Both were Iraqi Jews born in Baghdad.

Elie Kedourie fell out spectacularly with the Oxford academic establishment with his scathing and unfashionable view of nationalism, which he claimed had turned the Middle East into a 'wilderness of tigers'.

In 1992 on the sudden death of Elie Kedourie, Sylvia took over the editorship of  Middle East Studies, helped by her daughter Helen. She travelled to Montreal in 2014 to give a talk about the journal on its 50th anniversary.

She and Elie were the last of a breed of old-school political scientists, untainted by post-colonialist theories.
Posted by bataween at Thursday, October 27, 2016