Raphael Luzon: an innocent in Libya

Raphael Luzon was forced to leave his native Benghazi after the Six-Day War. Yet Libya still exerts a fascination for him - and he has paid three return visits there. On the last, he was lucky to escape Libya with his life. Here are two reviews of his short, personal memoir.

Lyn Julius writes in the Times of Israel:

Raphael Luzon sits in a hot and stinking Benghazi prison cell. He has escaped a lynch mob and been abducted by a militia. He has recently had a kidney transplant and his medication has been seized from him, along with his possessions. He  is not sure that he will get out of Libya alive. Until the Italian consul comes along to whisk him out to safety and back to London. 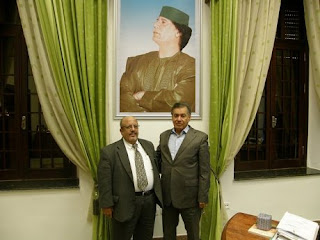 Raphael Luzon (left) visited Libya as a guest of Colonel Gaddafi
This is the dramatic opening chapter of Libyan Twilight, a short but vivid and well-written autobiography made up of snapshots of Raphael’s life, interspersed with memories of religious rituals and  festivals joyously celebrated during his childhood. Born in Benghazi, Raphael is one of a community of 38, 000 Libyan Jews forced to leave Libya. Today not one of them remains. Libya is judenrein.

In 1967, everyone — from the cleaning lady to the barber’s assistant — predicted that Jews would be targeted by a raging mob in the aftermath of Israel’s Six Day War victory. The schoolboy Raphael had to flee the hall where he was sitting exams, scooping up his sisters on the way home. The family were evacuated to a military base and thence to Italy. The Jewish boys in his Rome school were unfriendly. Exile took its toll on his broken father. Raphael’s later life was scarred by ill health and the death of his first wife from a brain tumor.

Yet Libya still exerts a fascination for Raphael, so much so that he paid three return visits there, twice at the invitation of colonel Gaddafi, and the last in 2012 in the full flush of the “Arab Spring.”

What drives a man, especially one who has family responsibilities in London and is not exactly in the pink of health, to risk his life by returning to his country of birth? A clue can be found in Libyan Twilight’s introduction by Roberto Saviano (an Italian journalist with a Jewish mother): “A deep desire for reconciliation and dialogue between different religions, a dialogue that relies on equality.”

The book carries the subtitle: “The story of an Arab Jew.” This too is a clue. Running a North West London “salon” for Libyans in exile,  Raphael has reconstructed himself as a Libyan nationalist of the Jewish faith, no different from a Muslim or a Christian. He wants justice but not revenge. He wants to reclaim his rights as a Jew in Libya: his grandfather fought alongside nationalists in Misrata.

But when brought face to face with Gaddafi, his demands are modest. He is not after compensation for seized property — that is for other Jewish leaders to demand. He wants Gaddafi to erect a plaque identifying the old Jewish cemetery. He wants a plaque on the mass grave where lie eight of his Tripoli relatives, shot by an errant army officer in 1967. And he wants a memorial service for them. No wonder Gaddafi readily agrees. 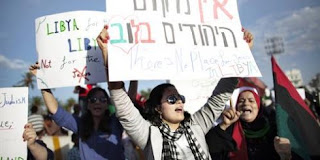 Demonstrators call for the expulsion of David Gerbi after he tried to open a Tripoli synagogue
Raphael is not the only Jew gripped with the urge to help rebuild a new, democratic, pluralistic and tolerant Libya in the wake of the Arab Spring. David Gerbi returned to his native Tripoli with the modest aim of re-opening the Dar al-Bishi synagogue — an act which Raphael has described as ‘a provocation’. Like Raphael Luzon, Gerbi was bundled out of the country by the Italian authorities before a lynch mob could tear him to pieces.

The lesson both these naive idealists ought to derive from their brushes with death is that no Libyan Jew is advised to demand their rights in their country of birth when their very existence as Jews is considered a provocation.

Andrew Rosemarine reviews the book in the Jewish Chronicle:


This short, nostalgic memoir is a highly personal view of the destruction of Libyan Jewry in 1967 and the permanent danger to all Jews from fanatical enemies.

Jews settled there over a thousand years before Islam, and numbered almost 40,000 before 1948. But Libya is now Judenrein, and will remain so as long as Jew and Arab fight over Israel.

Peoples who treat their Jewish minority badly usually treat other groups badly, too. This led to civil war in today's Libya. Numberless victims were murdered, many others tortured. Messrs Cameron and Sarkozy intervened to destroy Qaddafi but they had no realistic plans for the post-Qaddafi period. Why did they not learn from Blair's mistakes in Iraq? Why did they desert Qaddafi, after he, alone of all dictators, voluntarily gave up his nuclear weapons' programme under Western supervision? Luzon does not ask these questions. He limits himself to his own family's experiences. The style of the book is that of an innocent idealist, often surrounded by enemies, yet nobly dreaming of reconciliation between Muslim and Jew. It reads well, with personal flashbacks immersed in Jewish ritual and Arab political culture.

Qaddafi, though a killer of many of his own people, and supporter of the Palestinian cause, courted the Libyan Jewish diaspora, and tantalisingly offered the prospect of compensation. But only when he needed Western support. Luzon was involved in the discussion, and provides some insight.

He could have told us much about divisions among the colourful characters of Libyan Jewry in Rome, which sadly enabled Qaddafi to give them all nothing. Jews should hang together, if they don't want to be hung out to dry.