The august pink pages of the Financial Times have been carrying a long feature on the Yemenite Children Affair, hinting at an institutional cover-up of kidnappings, or children said to be dead but actually forcibly removed from their parents in the early days of the state. But in the absence of firm evidence, is the FT's purpose simply to use innuendo to blacken Israel's name? (When did it last run a feature about social engineering in Australia?) See my comment below(with thanks: Gina): 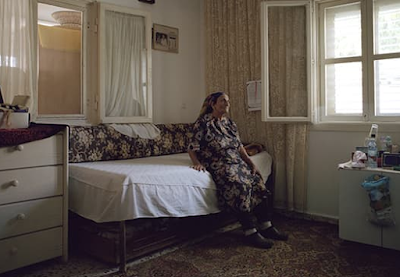 Naomi Giat may be 92 but she speaks of her flight from Yemen nearly seven decades ago with the wide-eyed urgency of a young woman recounting events that happened the other day. A seamstress, Naomi married her husband Yehiel, a jeweller, aged 13. In 1949, as life in Yemen became increasingly untenable for its ancient Jewish community, the young couple trekked from Sana’a to a transit camp near Aden to take part in Operation Magic Carpet, a massive airlift of Jews to the new state of Israel. The Jews had to put their jewellery in a box before boarding: it might weigh the plane down, an official told her. She never saw her silver necklace or bracelets again.

“Heaven,” she says, when asked how she imagined life in the new land would be. Because Naomi was breastfeeding her infant son Yosef, aged one, the couple spent just one night at the camp before being fast-tracked on to a flight. But the trip, Naomi’s first on a plane, was nerve-wracking;" When the plane landed in Lod in central Israel, it was dark, cold and hailing. As Naomi reached the tarmac at the bottom of the stairs, a waiting nurse told her she needed to take Yosef. Naomi protested but the nurse insisted, saying the baby was ill and needed tests. It was the last she saw of her son. Later the nurse came to their tent and told them that Yosef had been taken to another transit camp; two months later, Naomi and Yehiel were told he had died. There was no death certificate or grave. Naomi pined for Yosef, keeping and washing his nightgown for years. She still lights a candle on Friday evenings in his memory.

“I just want to know what happened to him,” she says in lilting, Arabic-accented Hebrew. She is not alone. Many families, mostly Yemenites or other Mizrachi (“eastern”) Jews from the Middle East, reported babies missing from hospital after sudden or suspicious deaths in the tumultuous years following Israel’s creation in 1948. Most parents believe — and in a handful of cases it has been proven, through DNA tests or paper trails — that their children were taken from hospitals or refugee camps and given to childless Ashkenazi Jewish Israelis of east European descent, including Holocaust survivors. Israel is now promising a full accounting of this alleged scandal, dubbed the Yemenite Children Affair because so many stories come from that community. Families from north Africa, Iraq and other countries have also reported children missing, as did some Ashkenazim from Balkan or other European nations. Suspicions first stirred on a widespread scale in the 1960s, when many parents began to receive military draft notices for their deceased children in the post. These suggested that the state was unaware the children were dead — or, the parents say, actively knew that they were alive.

The Yemenite Children Affair has been the subject of three Israeli official inquiries already, resurfacing every decade or two like a recurrent fever dream. The most recent state probe, in 2001, examined more than 1,000 cases and concluded that most of the children in question had died natural deaths. While it said that some of the remaining ones were probably adopted — and did not reach conclusions in a number of cases — it found no evidence of kidnapping or an organised conspiracy. However, the committee ordered the files in the inquiry sealed until 2071, prompting families who lost children — and the activists advocating for them — to accuse the state of a cover-up.

My comment: why does a respectable newspaper of international repute run a long -very long - feature about a domestic controversy in Israel that supposedly occured nearly 70 years ago ? As minister without portfolio Tsachi Hanegbi pours over files that might not be accessible till 2017, why did the journalist John Reed not wait till the end of October 2016 to learn of Hanegbi's recommendations to declassify the documents, or not, instead of indulging in speculation that the Yemenite Children Affair might have been a government cover-up? The case studies of the families who lost babies are desperately sad, but experts, including the historian Tom Segev, affirm that 90 percent of the lost children died of natural causes. However, the lingering impression to the average reader is of Israel as a force for evil. From the very first paragraph, Israel is demonised and assertions of 'crimes against humanity' - 'something that can't be separated from the Zionist project' linger in the mind. They steal jewellery, don't they? why would they not steal children? Well-worn cliches about 1950s European elitism, even racism, and the  'Sephardi-Ashkenazi' divide are trotted out, although the reporter admits that families from the Balkans and other European countries also lost children. Then there is the obligatory, derogatory quote from Ben Gurion, although he also said some complimentary things about Mizrahim.

More about the Yemenite children
Posted by bataween at Wednesday, October 19, 2016

The Financial Times is the most extreme of all British newspapers in its hatred of Israel and its people. It is worse than the Independent and The Guardian. As well as being anti-Israel it also publishes articles, some by by nominal Jews, denying or downplaying antisemitism in Europe and the West. It is fully in the pockets of the oil-rich Arab plutocrats whose goodwill is so important to the financial sector in Britain.

Whilst I accept that the FT may be / will be antagonistic towards Israel I have no problem with this FACTUAL article. Quote: "Shortly after his appointment, Hanegbi told a TV interviewer that “hundreds” of children had indeed been deliberately kidnapped in Israel’s early years — contradicting the previous committee’s finding".
DNA analysis is proving useful and several families have already been reunited.
Ben's comments above are superfluous and have no bearing on the ethos of the nature of the article, which if proved true by Hanegbi will cause an almighty stink , whether we like it or not , and it will be great newspaper material. Indeed kudos to FT for keeping it on the front page. Maybe one day they will have something good to say about Israel too.

The treatment of the Children is sore spot the Yemenite Jewish COmmunity will neither forgive nor forget...calling out to the L-d for Justice..on those responsible....