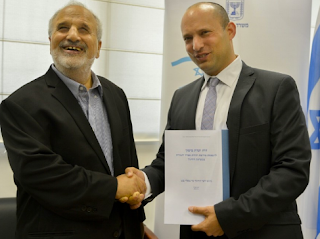 In  commissioning the Biton Report, was education minister Naftali Bennett making a play for the Mizrahi electorate - slightly less cynical than using a sports star ? (Or was it the result of

years of lobbying by organisations representing Jews from Arab countries?). Either way, Arye Tepper, writing in The Tower sees the promotion of Mizrahi heritage as a means to unite religious and secular Jews in Israel.

The inexplicable manner in which the heritage of Mizrahim—Jews from Arab and Islamic lands—is elided in Israeli schools was recently put on display with the release of the 360-page Biton Committee Report. Formed in March 2016 at the behest of Education Minister Naftali Bennett, and led by the critically-acclaimed Algerian-born Israeli poet Erez Biton, the committee assessed the manner in which Mizrahi heritage is taught (or isn’t taught) in the Israeli educational system.

The Biton Committee divided its work into nine subcommittees. The subcommittees were manned by 80 academics and experts who met weekly or biweekly in order to address different aspects of the Mizrahi story. Aside from a brief introductory synopsis, the report is, essentially, a summary of the work done by the different subcommittees. Unsurprisingly, the report calls for increasing the amount of Mizrahi history taught in grades 1-12. With regard to literature, the report notes, “At present a high school student studying in the state school system can complete his or her study…without having been exposed to the Mizrahi voice except for the poets of the Golden Age of Spain.” This, too, is supposed to change.

Specifically, the report recommends studying “the young generation of (Israeli) poets and musicians that has exploded on to the Israeli scene,” with an eye toward the working-class, southern development towns where many of these artists grew up and Mizrahi Jews were originally settled by the government. “This is another important perspective for studying the Land of Israel.” The committee also recommends utilizing the period around November 30th, designated Mizrahi Heritage Day by the Knesset in 2014 in order to commemorate the flight of Jews from Arab and Islamic lands, for teaching students about Mizrahi history and culture.

Read article in full
Posted by bataween at Sunday, October 16, 2016

This policy of opening up Israel's school curriculum to Mizrahi Jewish heritage and history, etc. was not Minister Bennett's initiative. I believe that Netanyahu has been quietly behind this policy and this effort for years. For instance, under the previous Olmert regime in Israel the Retirees Ministry held a special meeting for talking about the need to get reparations for Jews from Arab lands in any future peace agreement. One of the main speakers at this meeting was Uzi Arad, at that time Netanyahu's closest advisor. So we can be sure that Netanyahu approved of this position. Moreover, we know that Netanyahu likes to work as other clever politicians do in many other lands. He has other people promote a position or policy which he wants to adopt while he stands in the shadows or waits in the background. He did this with the Levy Commission which found that under international law the settlements are perfectly legal. Note that Netanyahu did not say this at the time but that three jurists, including former Supreme Court Justice Edmund Levy, said so. That is how Netanyahu often works and similar procedures are used in many places.

Labor has done exactly that 40 years ago, in 1976.They were the ones who coined the concept "moreshet yahdut hamizrah" in the singular to include both the legitimate Edot ha mizrah (Eastern Jews) and Edat hamaaravim (Maghreban Jews) under one single label: the Mizrahim. In other words, they eradicated the largest community of the Arab world in one Knesset meeting.
That was the last straw. Most vote likud not because it is different but because it's a vote against Mapai, as they still call it.