They are not in Spain, yet they are not Moroccan either. Six hundred Jews still live in the Spanish North African enclave of Melilla. But growing antisemitism, coupled with an economic crisis,  is driving them out. Fascinating article in Israel Hayom. (With thanks: Lily) 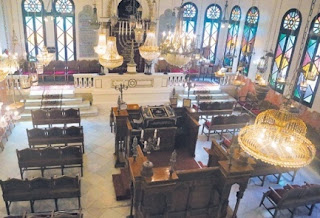 "There was a large Jewish community here in the past," Cohen says. "Over the last 15 years, the wealthier people left, most of them for Madrid and Malaga in Spain. The poorer people went to Israel, and others to South America, especially to Venezuela. The community is shrinking every year. The economic situation here and in Spain has deteriorated. Middle-class families have fallen."

He says the community is dealing with a situation in which the younger generation is becoming increasingly ultra-Orthodox, leading some to move to Israel to study Torah at yeshivas and to establish households, and others to remain and become more and more religious.

The Cohens are proud of their town. Melilla has tax-free trade status, and most of the Jews, as well as the other locals, deal in trade with Morocco, only a few steps a way from the city's beautiful marina. This directly influences the communal fortunes. According to Cohen, "The decline in trade, which employs most of the Jews, has led to high costs for the community because any aid [for community members] comes from the communal purse. So, in recent years, I have been suggesting to people to move to Israel. The situation in the Jewish community nowadays isn't bright. Ninety-five percent of students at the high school are Muslim. How can you send a child who has been [exclusively] with Jews until he was 12 years old to a school like that? The reality is sad and it is hard to sweep it [under the rug]."

In the center of Duquesa de la Victoria Avenue, 60 children attend a Jewish school up until age 12. Since the cost of tuition is around 300 euros ($327) per month, only about a fifth of the community can keep up with the payments. The others receive assistance from the donations of wealthy community members who have left the city.

"I'm talking about 40 families in the community who lived with dignity and managed small businesses and went bankrupt," Cohen says of those who require assistance. "For some of them, the community pays their rent. Some of them receive assistance for specific things. During the holidays, they give to everyone -- and it is all done anonymously. The state provides 400 euros [$435], which only covers rent, but if you are indebted to the state you don't even get that. The community has paid these debts more than once to allow its members to receive the allowance from the state."

Both father and son emphasize the importance of the school's existence and of the need for donations from within the community and from abroad to keep it from closing.

"The day that the school closes, the Jewish community in Melilla will no longer exist," Cohen states emphatically.


In addition to the issues of education and livelihood, the Jewish community of Melilla shares a problem with many other Jewish communities around the world. Cohen speaks openly and boldly about anti-Semitism.

"Lately, there has been a new phenomenon in which parents are afraid to send their children to the mixed high school, and we are seeing more and more children who are home-schooled after elementary school because of how they are treated as Jews," he says.

David adds: "There is serious violence in the schools. They yell 'Heil Hitler' in class and they hit the Jewish kids just because they're Jewish. This was true in my day too, only it has become more violent and aggressive. "

When David Cohen visits Israel, he wears a kippah, but in Melilla, he wears a hat instead.

"Tzitzit [ritual tassels] is not even an option," he says. "As a Jew, there are places where I won't go now. People in the community are closing their eyes -- some because they are afraid and some because they have an interest in doing so. Why would Jews who are municipal workers or who are in the government, where the salaries and conditions are good, speak about anti-Semitism? When Dad started working at the UIA, many people from the community came to him and asked him why he would do that. They didn't like it that Dad convinced people to move to Israel, and some bothered him."

Read article in full
Posted by bataween at Tuesday, October 25, 2016

Email ThisBlogThis!Share to TwitterShare to FacebookShare to Pinterest
Labels: Jews of Morocco, Jews of Spain

The Muslim population can't complain if their persecution and intimidation of the Jews drive them into the arms of Israel. They are the reason why Jews have to leave, they have no right to complain about where these Jews go to