The banker who saved Iraqi Jews from salted herring 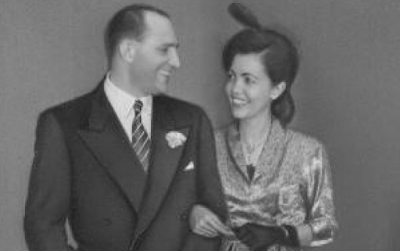 Yehuda Assia and 'fairy-tale princess' Jeanette on their wedding day.

Yehuda Assia, an Iraqi-born banker who at the Swiss-Israel Trade bank helped raise funds for the Mossad in its early days, has died at 99. Assia forged a career in Asia, the United States, Switzerland and Israel, helping to finance the new country’s nuclear reactor in Dimona. He took a great interest in Iraqi-Jewish refugees arriving in the maabarot in the 1950s. Thanks to his intervention, Iraqi Jews were recruited as cooks so as to spare the refugees from having to eat 'Ashkenazi' salted herring for breakfast. Obituary in Haaretz by Ofer Aderet (with thanks: Imre).


At 32, Assia immigrated to Israel in 1949 after studying economics and banking in the United States. Within two weeks he was an owner of a metal factory.


His life in Israel was interrupted in 1950 when the authorities called on him to go on a special mission to Switzerland, where Israel was establishing the Swiss-Israel Trade bank. Assia would set up and manage it.

But there was a backstory. The bank was also set up to aid the transfer of funds to finance Mossad operations. Thus was renewed Assia’s contact with Shiloah, his former Hebrew teacher in Baghdad.

Assia’s contact with the Mossad was close. At the end of the ‘50s he was urgently summoned to Jerusalem by the minister of trade and industry at the time, Pinchas Sapir.

Sapir asked him: “Assia, the country is on the verge of running out of sugar. We have to buy a huge stock of it, paying $2 million in cash. Can you put together such a sum immediately?”

As Assia was doing the paperwork, he was requested to establish a credit line for a further $2 million to finance the purchase of equipment for Mekorot, the company building Israel’s water pipeline. Assia later approached Golda Meir, the foreign minister at the time, asking if she needed funds as well.

Her answer: “I heard there was some Baghdadi magician here pulling money out of his sleeves.”

While in Geneva he married Jeanette, whom he described as “a fairy-tale Thai princess.” The two had met at a Bangkok club. Jeanette, who had an English father and a Thai mother, was a nurse by training and owned a jewellery store.

For years they had carried on a long-distance relationship and married after Jeanette converted to Judaism. Their son David was born in 1951, “an Iraqi-Thai blend that we loved so much that we thought it would be a sin not to create another one.”

Prime Minister Moshe Sharett visited the family in Geneva in 1955. In his diary he wrote: “We had lunch with the Assia family – the young Babylonian Jew who lives here with his Siamese wife and their three beautiful children.”

In 1956 he established a branch of the bank in Israel, calling it the Foreign Trade Bank. This later merged to form the First International Bank of Israel. Assia described this as “the first penetration of the closed banking club since the state was established.” Three years later he also established the Arab-Israel Bank.

His involvement in undercover operations continued as he collected donations for Israel. His most serious job was a request by the Defense Ministry’s director general at the time, Shimon Peres. The task: to raise funds that would help build the nuclear reactor in Dimona.

A year later, he was approached by Finance Minister Levi Eshkol, who was looking for investors in a new oil pipeline from Eilat to Ashdod. Assia became the deputy chief executive of the Eilat-Ashkelon Pipeline Company. The company operated for a decade before it closed upon the signing of a new agreement between Israel and Iran.

In 1963 Assia returned to Israel. He continued working in banking and lived in the affluent town of Savyon, spending some of the time in Switzerland with his wife. When she died in 1990 he moved to Israel permanently, living in Tel Aviv.

Assia also engaged in philanthropy. During his first years in Israel he helped integrate Iraqi immigrants and visited the tent camps where they lived. Once he visited a camp in Pardes Hannah and heard people shouting in the kitchen. He entered the room and saw immigrants arguing with a man from the Jewish Agency who was serving them breakfast.

“To my amazement, things became so heated that one of the immigrants threw a tray of food in the face of the person handing out the food,” he wrote. It turned out that the immigrant had accused the man of giving them rotten fish “in an attempt to poison them. He claimed that the man had sold the good fish and pocketed the money.”

It turned out the “rotten fish” was “perfectly normal salted herring, suitable for consumption but unknown to the Jew from Iraq,” Assia wrote. So he had a talk with Israel’s chief for immigrant absorption.

“I‘ve lived in Japan, I’ve done business in Thailand, I’ve lived and studied in the United States, and I now have a few Ashkenazi partners, yet to this day I can’t put something like that in my mouth,” he wrote. “How do you expect Iraqi Jews to eat herring for breakfast?”

The solution was found by making some of the Iraqi immigrants cooks. Assia was then chosen to head Israel’s association of Iraqi Jews. He later became the president of a fund he established for the advancement and education of Iraqi Jews in Israel.

I like the stuff, but certainly would not have missed it for the sake of some good shakshuka or pilau b'geege

I love good herring as well as smoked salmon [lox] and salmon afu'i and herring in different varieties and cut in different ways and so on and so forth. But I must admit that some of my suppliers of good smoked and baked fish in the Mahaneh Yehudah Market in Jerusalem are Mizrahi guys, in addition to a very religious Ashkenazi guy. Just today I shopped at Ivgi's stand which used to be owned by an Abu Dawud who sold it to his former employe, the young Ivgi. Anyhow, I advise lovers of good smoked and baked and spiced fish to come to Jerusalem and the Shuq Mahaneh Yehudah. When Obama gets overly obnoxious, as he often does, I think of the delights of the shuq.

Thanks for your delicious post. Avid smoked and baked fish lovers, go ye to the shuk!