An exhibition of photographs of Jewish life from the city mellahs to the Atlas mountains,  set to open in Belgium on 4 September 2016, will mark European Day of Culture. The day will be dedicated to the 'Jews in the lands of Islam'.

The Jewish Museum in Brussels will feature more than 100 photos of the Jews of Morocco taken by Aron Zede Schulmann. Visitors will be able to watch  Ya Hessra Douk Li Yam , a documentary made by  Moroccan Jewish community leader Serge Berdugo, and Mark Berdugo. Professor Joseph Chetrit will come from Haïfa to give two lectures. There will be workshops on Andalusian perfumes and Arab and Hebrew calligraphy. 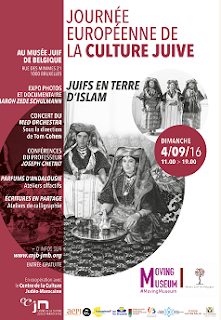 In May 2014, the Jewish Museum in Brussels was the scene of a terrorist attack. Four people died.

The exhibition follows another major initiative to promote Moroccan 'tolerance and diversity', the touring exhibition Morocco and Europe: six centuries through the eyes of one another. 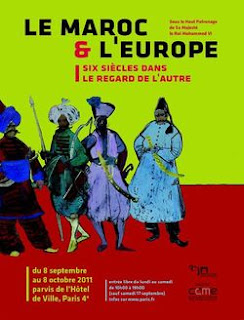 The exhibition has been on tour since 2010 and focuses on six centuries of exchange between Morocco and Europe. It aims to foster dialogue and strengthen links across the Mediterranean.

However, critics charge that it is 'islamically-correct', and conceals or plays down historical facts in order to project an illusion of cultural diversity. The journalist Veronique Chemla accuses the exhibition of promoting 'a biased and partial vision', full of 'hollow generalities' and projecting a false sense of security concerning the topic of modern Moroccan immigration into Europe, in spite of incidents of terrorism perpetrated by North Africans on European soil.

The diversity vaunted by the exhibition is belied by the fact that a community of almost 300, 000 Jews has been reduced to less than 4,000.

While references to Judaism and Jews abound in the exhibition - an oil lamp for Hanukkah,  lithographs of Isaac Bitton, boxer (1778-1838) and Dr. Moses Edrei (1774-1842) , Kabbalist and professor of modern and Oriental languages, an aquatint representing a Moroccan Jew selling ribbons, mirrors and scissors in the streets of London (early nineteenth century), and a watercolour of a young Jewish woman from Tangier - the role of Jews in forging ties with Europe is curiously downplayed.

After reading this entry, I cannot but wonder why the EU centered curators of this exhibition go out of their way to paint a naïve and false "rapprochement" between Morocco (could be any Arab country for that matter) and the Jews as a way of diversity that has never been there in the first place. I mean diversity by the individual equal rights, not the mere statistical count of different groups, be they religious, ethnic, regional of whatever. I know for sure that Moroccans in general(and curators of museums specially if they exist) cannot do it with clear conscious, perhaps they know deep down that it is a tough act to play when they cannot come to terms with the idea that they are equal to Jews. So they leave the work for the EU centered politically correct people (therefore anti-Jewish) to do their dubious propaganda filled with half baked discourse of equality.

It is still puzzling to me how Kitsch it is and how absurd it looks and sounds. Western Cultural Marxism beats the drums to the fullest. They cannot fool me.

they like to focus on things like calligraphy. I am all for calligraphy but it becomes a superficial way of glossing the real and unpleasant parts of history. How about the maiden Sol Hatuel who was beheaded in Morocco about 200 years ago for allegedly reverting or backsliding to Judaism [it is a capital crime in Islam for a Muslim to convert to any other religion]. In fact, her conversion to Islam was made up by a Muslim woman she knew who wanted to harm her.

Likewise, cuisine. Like calligraphy it is a nice, soft and fuzzy topic of discussion. Everybody likes food and we can pretend that we are all friends because we all eat humus or whatever. Like we can pretend that Jews in Ukraine and non-Jewish Ukrainians were all buddy buddy and equal because everybody ate borsht.

Western Sahara was a Spanish colony for century. When Spain left in the 1970s, Morocco and Mauretania claimed it as did the so-called Polisario Front. Ban Ki Moon considers the territory to be occupied and said so arousing Moroccan anger. It seems that the Int'l Court at the Hague agrees that it is occupied by Morocco. The answer does not especially bother me, but the differential treatment of the internationally recognized occupation of Western Sahara compared with the treatment of Israel's alleged occupation of Judea-Samaria does bother me. The EU has various agreements with Morocco in the trade area that cover Western Sahara as part of Morocco. This has been discussed by Prof Eugene Kontorovich who also makes this comparison. Likewise, Kontorovich has stressed the issue of the occupation of northern Cyprus by Turkey and how EU bodies and commercial bodies in various EU countries are happy to do business with and in northern Cyprus despite the supposed illegality of doing biz in occupied areas.

"As Morocco continues to defy the United Nations, the International Court of Justice, and much of the international community in its continued occupation of Western Sahara, the United States continues supporting that autocratic government.
Morocco has illegally occupied the former Spanish colony for more than 40 years. Despite promising to hold an internationally-supervised referendum on the fate of the territory in return for a 1991 cease fire with the nationalist Polisario Front, the kingdom has strengthened its grip on the territory and recently expelled the civilian members of the U.N. Mission for the Referendum in Western Sahara, or MINURSO." [S Zunes, Nat'l Catholic Reporter]

"Much of the international legal analysis of dealings in natural resources in Western Sahara has focused on its status as a Non-Self-Governing Territory, as well as the right of self-determination of the Sahrawi people. Surprisingly overlooked in the legal debates is a close examination of the application of the international law of occupation under international humanitarian law (IHL). This article considers whether and why Western Sahara is ‘occupied territory' under IHL, discussing some of the unique peculiarities that complicate the legal answer. It then considers issues of state responsibility and individual criminal liability under international law for unlawful dealings with natural resources in Western Sahara by Moroccan and foreign companies." [Ben Saul]

It's outrageous that the occupation [true or false] of Western Sahara by Morocco is treated differently by the int'l community compared to how it treats Israel's alleged occupation of Judea-Samaria, as well as the differing claims made in the name of int'l law about a ban on dealing with occupied territories. Likewise, northern Cyprus.