One of the more surprising tributes to the Israel statesman Shimon Peres has come from Kurdistan, according to Kurdistan 24 News: 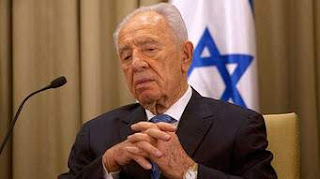 Shimon Peres, who died on 28 September 2016
ERBIL, Kurdistan Region (Kurdistan24) – Kurds held a funeral on Wednesday for Shimon Peres, former President and Prime Minister of Israel, in a show of respect for his support for Kurds.

The founding father of Israel, who is also a Nobel Peace Prize winner, died on Wednesday morning, after weeks of suffering from a major stroke.

Kurds in the Province of Duhok held a funeral for Peres, sending condolences to his family.

Kurds’ respect for Peres came after his meeting with the US President Barack Obama in 2014.

Peres advised the United States to support the Kurds and the creation of a Kurdish state, praising the democracy practiced in the Kurdistan Region.

“The Kurds have, de facto, created their own state, which is democratic. One of the signs of a democracy is the granting of equality to women,” Peres told Obama in 2014.

Shimon Peres (born 1923 CE, died 2016 CE) never understood that Muslims have always hated Jews, and will always hate Jews forever, because that is what their religion requires them to do.

Shimon Peres never understood that according to Islamic Religious Law [sharia], peace-treaties between Muslims and non-Muslims are worthless, and should be violated as-soon-possible by killing the non-Muslims that the peace-treaty was made with.

Shimon Peres never understood that Islam cannot tolerate any Jewish state anywhere in the Middle East, regardless of its size or the shape of its borders.

Shimon Peres never understood that Islam requires that Jews must be constantly oppressed by Muslims and trembling-in-fear before Muslims.

Shimon Peres never understood that Jews having their own land and their own army is offensive to Islam, regardless of its size.

Shimon Peres never understood that Islam requires that Jews must be only a little-bit-better than slaves.

Shimon Peres never understood that Muslims view any compromise as humiliation, and humiliation is the worst thing in Muslim culture.

Shimon Peres never understood that forgive-and-forget is not part of Muslim culture, especially when dealing with non-Muslims.

Shimon Peres never understood that the Koran describes Jews as “apes and pigs”.

Shimon Peres tried to negotiate peace with Muslims, but with zero understanding of Muslim beliefs. The result: The Oslo Accords were a disaster for Israel, and the severe troubles that Israel faces now were caused by it.

To Mr. Cohen,
One correction! The Koran does not describe Jews as "apes and pigs". Rather, the story in the Koran is that a specific group of Jews who were violating the Shabbat were turned into apes and pigs as a punishment. The rest of the Jews remained and remain fully human. That said, it is nevertheless a mainstream belief in the Muslim world that Jews are the sub-human descendants of apes and pigs, with all of the conceptual consequences you'd expect. So your overall point for that line is not at all wrong. Still, what you wrote is inaccurate.

OCG, in one place the Quran says what you say it does. But in other places it simply calls Jews descendants of apes and pigs.