An online video showing  Jews in Morocco dancing around a giant photograph of King Mohamed VI has been attracting over 450, 000 views in a single day. The Jews are singing a song about the 1975 Green March into Western Sahara and serve to lend legitimacy to the Moroccan claim to the disputed territory. Morocco World News reports: 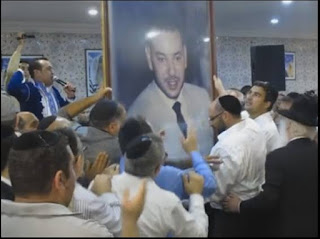 The video also shows the presence of Muslims in the crowd and government officials, clapping while the Moroccan Jews gather in the center around the photo of the king dancing and hopping.

The song they danced to, ‘Sawt Al Hassan’ (which means “The Call of Hassan” in English), is a particularly important song for Moroccans. It records the memorable historical moment of the ‘Green March’ when King Hassan II inspired Moroccans march to the Moroccan Sahara to free it from the Spanish colonize (sic) continued dancing.

Posted by bataween at Wednesday, September 28, 2016

Part One:
It is a strange scene to view. Jews boogying by lifting a portrait of a king (the grandson of the late and the beloved M5 by Jewish Moroccans). I could not believe that these Jews were aggrandizing a Muslim king. The great Rabbi Baba Sale would not have been given this much adulation with such fervor and allegiance in Morocco proper. I am aware that such rituals are common in Israel among the Baba Sale devotees. There major issues that I would like to raise about this situation that the Moroccan Jews find themselves in. It is very sad to see these Jews acting that way. But knowing the very nature of power relations game that is all the time played in Morocco, I can maybe take a more relaxed attitude and lower my level of criticism where I can simply close my eyes and pretend that this is good and acceptable for the sake of the Moroccan Jews living there.

My issues have nothing at all to do with the Western Sahara. However (here I go again), I have been a bit critical with the manner and ways with which the late king Hassan II did his bidding for this territory. Calling it “La Marche Verte” (the Green March) by sending hordes of people (sometimes under “soft” threat – can someone say no to the King’s calling?) to break border crossings, raising huge red flags under the infamous slogan “God, the King, the Nation” marching in unison like the old communist marches of Maoist “the Great Leap Forward”. Green is not a color I would chose for this lunar barren empty landscape, besides no gardens of Eden have sprung up since the takeover. Anyway, with the mass of people as illiterate as the average Moroccan, there were no other ways to do it, besides recourse to the archaic totalitarian slogans and major social engineering policies. I am, at least, glad that nothing as disastrous in terms of loss of human lives came out of this kitsch staged takeover.

This piece of desert deserves to be with Morocco and should be unified with it politically and economically, instead of an alternative failed state which could most likely be another ISIS center for the Maghreb or another BokoHaram Trans-Saharian beltway with its base in Nigeria. Furthermore, I would utterly oppose the armed liberation group financed by the Algerian Military Junta interfering with this piece of territory, using the usual naïve and credulous liberation/ resistance doctrine of leftist politics, which by the way, was supported by the late great Jewish Moroccan Marxist activist Abraham Serfaty.

Back to the crux of the matter, the awkward scene of the dancing party of Jews. This raises two issues: the legitimacy issue and the ostentation of the Jewish devotional adulation of the King. I will speak of them in the next entry due to the limit in the amount of words allowed.

Part Two:
The present king M6 legitimacy (even more so now than his father H2) rests on a very thin layer of authenticity because of the present political context. Morocco’s monarchy presents for me a big dilemma. Although I see it as a better than two evils when compared with authoritarian Algeria, I really have issue with the monarchy as to the way it is instituted and anchored in these modern times. His father H2 had to be hawkish because of the tense cold war atmosphere, marked with constant threats of coup d’etats by the newly independent states that saw any monarchy as an abomination, a remnant of the old order. His survival to two bloody coup d’etats attest to this. M6 case is different, because his ascension to the throne came at a different time and political contest, with the end of the cold war and the new area democracy.

I would have preferred the king to take the same role and status as his contemporary dying European breeds, which is to say to assume a symbolic role; keeping political parties to rule and people have a say. Morocco has experimented with parliamentary democracy, sort of. The stick is always by the side of the ruler monarch. On one side, his is the keeper of peace. The Arabs are a tough people to rule, especially when their level of literacy is low. Their way to democracy will ultimately lead to totalitarianism with some time intervals of chaos, anarchy and with it some lynching, vendettas and the usual senseless violence or war against all. The current debacle in Turkey is a good example. Maybe it is of no avail to spread democracy. At this point, M6 is fair and square the best of all possible worlds and Jews in Morocco should dance to prove their support. Yet, as a free thinking Jew who lived in Morocco, I cannot but wonder how long this fake dance will last. I would have liked (if not to question monarchy legitimacy- since we all know, that the alternative would be a carnage) to see that some changes to the court and public ritual ceremonies and the almost cult of personality status of the monarch. It no longer works.

The debasement aspect of this cult of personality is symbolically unreal. All subjects have to kiss the monarch hand. A ritual that would have been perfectly functional and justifiable a century ago, but nowadays I am not sure. When an appointed ministers, generals, public officials or anyone under the Moroccan sun have to lower their backs to reach out for the right hand and kiss it, is to me, one in which legitimacy is dictated by utter force and degradation. The worse is when the king sends his five or six or seven year old son to events or grand cultural openings and all subjects have to do the same disgraceful ritual and this to a kid who cannot even clean himself well without the help of countless servants and slaves (palace slaves I should add). Why can’t the king do away with is shameful ritual? Is that too much to ask? Free thinking and educated Moroccans are not asking for the king’s abdication. They came to understand the unifying role the king has, as the “lord” protector against chaos, anarchy and Islamic fundamentalism or whatever evil lurks out there. However, they are and should be “citizens” of Morocco, and should no longer accept to be considered as “subjects” to the monarchy’s will and whims. I recall discussing the issue of the concept of citizenship with someone. The influential court Jews of Morocco should ask the king to tone down his grip on this senseless backwards rituals instead of accepting it at face value and “dancing” along with it.

As the proverb says: “You cannot piss at me all the time, and expect me to call it rain”.

Maybe the Jews of Morocco are NOT “pissed at ” all the time, but they, at least can speak of others who are , and refrain from being seem as overly passionate of the king by dancing with his portrait. The king of Morocco is no Tzadik.