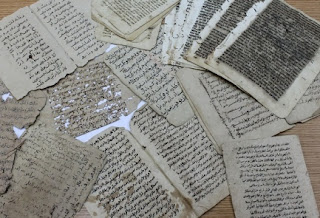 A unique collection of Jewish and Muslim manuscripts dating from the 11th to 13th centuries C.E. from the region of modern-day Afghanistan was acquired by the National Library of Israel recently, Israel Hayom reports (with thanks: Lily)

Researchers believe it could prove unprecedented in what it can teach them about the lives of the communities along the Silk Road.

Scholars believe the treasures that lie in the pages of the latest acquisition will revolutionize knowledge of Jewish communities in that region in that era, as well as provide a rare glimpse into the Muslim cultures of Persia and pre-Mongol Afghanistan. According to the library, most of the documents were written by Jewish and Muslim merchants who lived prior to the destruction caused by the invading Mongol army under Genghis Khan between 1258 and 1260.

The documents provide information about the day-to-day lives of the communities, social ties, and the Jewish economy of the region in that period.

Read article in full
Posted by bataween at Tuesday, September 20, 2016