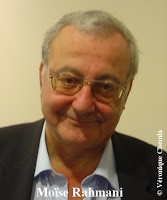 The death has been announced of Moise Rahmani, founder of the Institut Sepharade Europeen (www.sefarad.org) and publisher of the quarterly review Los Muestros.

Moise Rahmani suffered from failing health in his later years, and despite efforts to pass on the editorship of Los Muestros to his daughters, announced in December 2015 that he was ceasing publication owing to lack of resources.

Moise Rahmani's family background straddled several countries. He was an influential figure of tireless energy in the Sephardi and Jewish world and his prodigious output of books of Sephardi interest included L'exode oublie, an overview of the exodus of Jews from Arab countries. He published Los Muestros in Ladino, English and French for 20 years.

His website www.sefarad.org remains as a lasting monument to his efforts to preserve Sephardi history, language and culture.