Two Israelis from war-torn Aleppo share their memories with Ynet News. They find reports of the loss of life and destruction of places they knew as children painful. But they must also feel relief to have left.

Yossi Antebi, an 80-year-old resident of Tel Aviv, grew up in Aleppo, and is finding it hard to see his childhood home torn apart. "When I hear the reports, it pains me greatly. I see the places explode and know all the names," shared Antebi.

"We lived in the center of the city; we had it good in Aleppo. But I was a Zionist; I wanted to immigrate to Israel. At the age of 18, I tried to run away, and I was caught in Lebanon, and in the end we immigrated to Israel nearly naked," recounted the Tel Aviv resident. 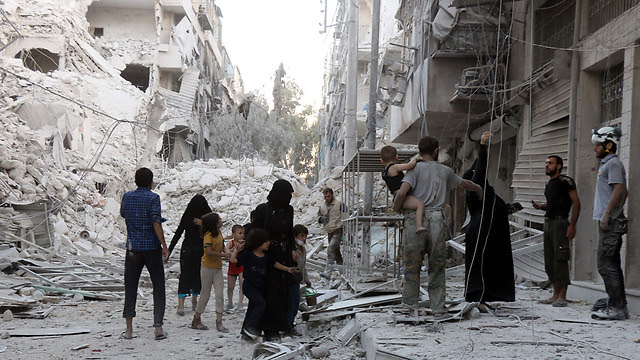 "Sometimes, I'm sad that I left Aleppo, because there I knew which house belonged to whom. There was a yard that where everybody gathered every Shabbat. Here, I barely know the neighbors. I had Arab friends, customers who cried when we left. Because of this, it's very painful for me when I think of those people and how that dog, Assad, carries on."

David Gindi, who also left the beleaguered city 58 years ago. "I'm sad when I see what's happening," he said. "I don't remember Aleppo well. As children, we had a lot of problems with the population; they would ambush us on the way to school, particularly after the establishment of the State (of Israel). When we immigrated to Israel, we just left everything."

Read article in full
Posted by bataween at Monday, September 26, 2016

the former Aleppans are not quoted in the article as mentioning the pogrom in Aleppo after the UN General Assembly vote recommending partition of Israel on 29 November 1947.