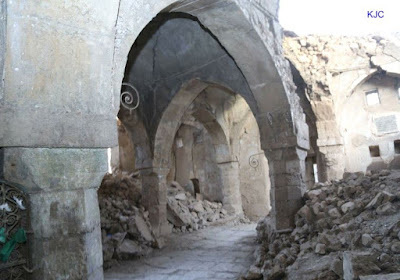 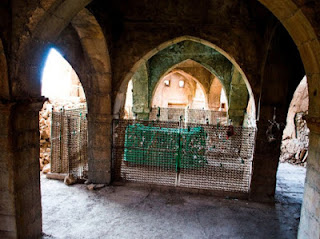 Top: the shrine is crumbling on one side, but another view shows the area where the tomb is located is intact.

The Kurdish government 's appeal to save Nahum's tomb seems to be falling on deaf ears at UNESCO, despite the organisation's own director-general's commitment to save the Middle East's cultural heritage. Arutz Sheva  reports:

An ancient Jewish site located just 30 miles from Islamic State-controlled Mosul is at risk of collapsing, a representative of Kurdish Jewry says.

Sherzan (Sherzad - ed) Omer, Kurdish Jewry’s representative in the Ministry of Endowment and Religious Affairs at Kurdistan Regional Government (KRG), said the biblical prophet Nahum’s tomb, which is in the town of Alqosh, is in dire condition, Kurdistan24 reported Tuesday.

In a statement released Monday, Omer said his team "investigated the structure of the building, consulting experts, engineers and architects, and they report the building could completely fall apart within a couple of months.”
He called on historical preservation groups, the United Nations, UNESCO and others to come to its aid.

The Post sought comment from UNESCO, however, after having been transferred by the headquarters to the World Heritage Center, was met with the response: “Kurdistan is not a country” and they therefore could not help.

“We demand all the historical heritage preservation organizations, the United Nations, UNESCO, the KRG and all the representatives of countries in Kurdistan help to prevent the destruction of this historical monument,” Mamsani said.

Read article in full
Posted by bataween at Wednesday, August 03, 2016