Sydney Assor, a leading member of the Moroccan Jewish Community in Britain and a member of the British Board of Deputies, has been made a Commander of the Wissam Alaouite.

The award is the highest Moroccan honour accorded to a foreigner. It was conferred on Mr Assor by the Moroccan Ambassador to the UK,  Princess Lalla Joumalla. 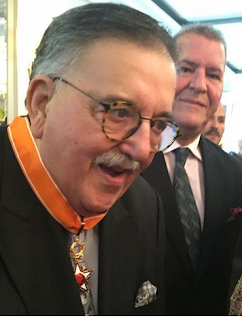 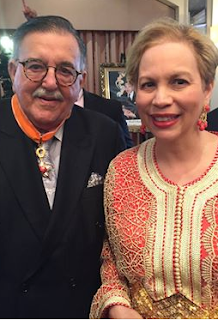 Sydney Assor wears his medal, conferred on him by Princess Lalla Journalla

Mr Assor has devoted much of his life to interfacing with the Moroccan government about Jewish affairs. Recently, he visited Tunisia and had an audience with the president.  He calls Moroccan Jewry "a shining example for successful coexistence between Jews and Muslims".

Mr Assor has been quoted as saying that  he never had trouble defining his identity as a Moroccan Jew while living in Morocco, and that real persecution in his lifetime took place only during the Vichy epoch.

He met prejudice when he moved to England, mostly by fellow Jews, who considered Moroccan Jews uneducated, politically immature and socially inept.

He conceded that the Jewish community did have its struggles in Morocco just as anywhere else, but declared that contemporary Moroccan reality includes Jews enjoying full civic rights and shared civic dignity. Assor attributed this fact to the inclusive policy pursued by Kings Mohammed V, Hassan II and Mohammed VI of Morocco.
Posted by bataween at Friday, August 19, 2016