The visit to Israel  by a Saudi Arabian ex-general, Anwar El-Eshki and his delegation, might herald a new dawn in Saudi-Jewish relations, in which Jewish visitors to the kingdom might be able to see for themselves sites of Jewish interest. The Times of Israel reports (with thanks: Lily):

These are five top Jewish spots in Saudi Arabia, to savor online for now, and just maybe up close in the near future:

1) Khaybar is situated in a valley with natural wells that have irrigated the area since ancient times, aiding in the growth of dates known throughout the country. The oasis made Khaybar a regular stop along the incense trade route from Yemen to the Levant, which is why it was the home of the Jewish community at the time. Visitors can also stop at the Jewish cemetery, a 1,400-year-old graveyard without any headstones but known locally for its Jewish history.

2) There’s also the Khaybar Fortress, perched on a hill overlooking the oasis, which is at least 1,400 years old. The earliest accounts of its construction date from the Battle of Khaybar, when the Prophet Mohammed and his army invaded and conquered Khaybar. It was Mohammed’s nephew and son-in-law, Ali, who was able to unlock the gate of the fortress to allow the Muslim armies to finally conquer the fortress. It was rebuilt and reused several times, but is still usually referred to it as the Fortress of the Jews. 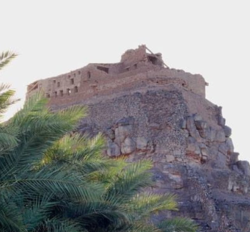 3) The Palace of the Jewish Tribe’s Head is also located in Khaybar, and was the home of the Jewish tribe of Marhab. The tribe was known to be wealthy from dealing in gold and jewelry, and the palace it lived in is above the town, about a ten-minute climb from the center.

4) In Tayma, which was often referred to as a fortified city belonging to the Jews, most travelers stop at the Al-Naslaa Rock Formation, located in the Tayma oasis. It’s considered to have one of the most photogenic petroglyphs, or rock art, depicting the life and times of ancient communities. Al-Naslaa is also known for the perfect, natural slit between the two standing stones. Experts say the cause of this perfect slit could be the ground having shifted slightly underneath one of the two supports.

5) At the center of Tayma is Bir Haddaj, a large well considered to be about 2,500 years old, dating back at least to the middle of the sixth century BCE. It wasn’t in use until the 1950s, when it was repaired and later restored to its previous appearance.

The well is mentioned in the Book of Isaiah as the place where the descendants of Ishmael’s son, Tema, lived: “Unto him that is thirsty bring ye water! The inhabitants of the land of Tema did meet the fugitive with his bread.”

There are also the famous Tayma stones inscribed in Aramaic that are now in the Louvre Museum. Thousands of other Aramaic inscriptions that have been found in the area are stored in the city’s museum.

the notion that Jewish tourists, whether from Israel or elsewhere, will be welcome or even permitted in Saudi Arabia anytime in the next 15 years --and maybe not for long after that-- is rather naive. The relations in the political/diplomatic and military domains between Israel and the Kingdom of Saudi Arabia are a fragile plant that can grow best in the shadows. The masses in Arab countries are far from accepting Jews or Israelis and are as often as not imbued with Islamic Judeophobia and prejudices.
Think of how Israeli tourists are welcomed in Egypt and Jordan to this day. Egypt is considered too dangerous for Jewish tourists who are perceived as Jews, and actually too dangerous for most foreigners. As to Jordan, just the other day, a Jewish Israeli family was told it would only be allowed to cross the bridge over the Jordan if it divested itself of all Jewish religious objects, including prayer shawl [talit], kipot, Tefilin [leather prayer boxes], etc. The family had wanted to visit the traditionally recognized tomb of Aharon, brother of Moses.

Is this for real?? Saudi Arabia allowing Jewish tourists to visit old Jewish sites?? Who is kidding whom here?? Sites "maybe accessible soon"?? Thanks God it is "soon" and not "right away". Those interested who want to jump unto this desert caravan should think twice. They should take a bit more time to reflect on the journey to the long lasting desert Goulag of the Middle East.

If only people know how the Saudis treat their guest workers (mostly other minority Muslims from poorer countries), and few general non-muslim tourists, the world would recognized that this is a naïve announcement designed to create a positive PR outlook on this bloody frozen 12th century mentality kingdom. To even think that Jews would be treated differently there (even without diplomatic relations, and the constant anti-Semitic Friday sermons and vitriolic diatribes of the young reality TV imams in MEMRI ) is beyond me. And to even think that a Jew, with a sound mind and soul, even entertaining the idea of going there, is far beyond me.

It's a joke. Saudi Arabia (like North Korea) is one of the lasting nasty totalitarian state run by some old Wahabi wolf pack families. The only thing positive for them is the wealth (oil) that comes pouring out of the ground.
Forget the Jewish Fortress of Khaibar and the Jewish town of Yathrib. Do not search for the ancestral grounds for the once powerful Jewish tribes of Banu Quaynuka, Banu Qurayza, Banu Nadir and Banu Sa'ida . There is nothing there to see. Our ancestors’ footprints are buried in the sand. And that’s all that counts.

Khaybar was the sight of an Arab MASSACRE of JEWS! That's akin to going to Auschwitz! The difference is that at Khaybar the Arabs took the Jewish women as sex slaves as ISIS has done w/Yazidi women, while the Jewish children were taken as slaves.