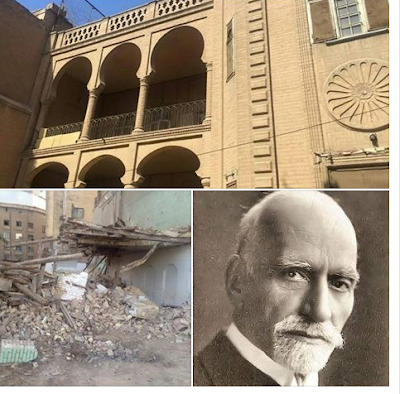 Reports that the home of Sir Sasson Heskel, Iraq's first Finance Minister and a Jew, has been demolished have been circulating amongst Iraqis on Facebook.  If true, the demolition shows a callous disregard for Iraq's architectural heritage and represents another nail in the coffin of the memory of Baghdad's ancient Jewish community. Below I am re-posting a 2011 article by Najem Wali describing Sir Sasson's 'House of Dreams', and the personal memories of Diana S, Sir Sasson's great niece, who spent some of her childhood in the house.

"House of Dreams" – that is the only truly fitting name for this building, I find. I can remember that every time I walked past it back when the country was still called the "Republic of Iraq" I would think of the master craftsman who once built it. That was at the beginning of the 20th century, in the times of the great craftsmen (before architects and engineers took over construction) whose intuitive artistic skills were guided more by fantasy than reality. And even today, despite all the changes that have been made, anyone who looks at the house, standing there defiantly, can't but be amazed by the skill of Master Kathim Ibn Arif at having created such a magnificent and elegant building.

Everything about it is beautiful: the curves of the arches, the doors, the balustrades on the roof, the wooden-framed windows, the sweeping balcony high above the Tigris. It's almost as if each stone of the house, set back slightly from historical Al Rashid Street, had been gently stroked and lovingly formed by the master's hand. As if that hand had never realised that the owner of this building, which could have comfortably housed a large family, would remain unmarried his whole life long.

Yes, it really seems as if that Baghdad master builder knew with an instinct unfettered by university study that this house would have to be large enough to accommodate all the dreams of its future occupant. That it would have to have as many rooms and levels as the dreams of the man who would sleep and wake up in it. As if the master had known that this house on the banks of the Tigris in the centre of Baghdad would stand the test of time – an enduring testimony not just to the inability of a whole series of governments to strike it from collective historical memory, but above all to the dreams of masters long gone and masters yet to come.

I couldn't help thinking of all this when a few weeks ago, on a gloriously joyous Wednesday (which only became joyous after I narrowly escaped a car bomb in front of the National Theatre), I sat on the balcony of that house – together with Iraqi filmmakers, directors, actors and camera people, some of them my age, others still young.

It was one of the rare happy gatherings of my most recent visit to Baghdad. I could count the times I've had such wonderfully inspiring moments on the fingers of one hand. That day I understood better than ever before that this architectural work by one of Iraq's renowned masters, into which he had poured all his fantasy and creative skills, could only be one thing: a dream factory.

The house first caught my attention when I came to study in Baghdad in the early 1970s. Particularly for those of us who came from other cities, this magnificent building on the banks of the Tigris was very striking. To get into it or get a good look at it you had to approach from the side facing the river, which offered us the happy opportunity of taking secret swims in the river or sitting on the river bank. I can't remember any of us ever using the main entrance on Al Rashid Street. But I do remember that the name of the original owner, if mentioned at all, could only be whispered.

Remember, I'm talking about 1973 and the years after here. Just over three years before, the Baath regime had executed Jewish and Shiite citizens under the pretext that they were spying for the Israelis. The mere mention of a Jewish name back then was enough to raise suspicion, despite the fact that the original owner of the house, who spent the last years of his life here, had died on August 31, 1932 in Paris – 16 years before the founding of the State of Israel, and therefore couldn't have had anything to do with such accusations. Nor did it make the slightest difference that this man was Iraqi to the core.

The grand old lady Gertrude Bell once wrote of him that he was "by far the ablest man in the Council. A little rigid, he takes the point of view of the constitutional lawyer and doesn't make quite enough allowance for the primitive conditions of the Iraq, but he is genuine and disinterested to the core. He has not only real ability but also wide experience." He laid a solid foundation for the Iraqi economy by creating a financial system with clear, fixed rules. And as the records of the negotiations with the British on how the revenues from crude oil were to be distributed make clear, it was he who pointed out to the chief negotiator that the gold standard should be applied for calculating the oil revenues, to ensure that the shares of the revenues remained stable.

Five times he was minister of finance, as if all the different governments agreed on his competence and impartiality. After his death not a single secret account was discovered, either in his name or in that of any relative.

And not only that: he was so thoroughly Iraqi that to this day he is one of the very few politicians of this country at the mention of whose name the words "God bless his memory" always followed, as I heard my grandfather say countless times. Who could forget Sir Sassoon Eskell, the first Iraqi minister of finance (appointed on 27 October, 1920, with the government of Abd Al-Rahman Al-Gillani); Sassoon Effendi, as his Iraqi contemporaries (in particular the Baghdadi) used to call him, whose name could never be separated from the house despite the attempts of all the governments that followed?

What particularly caught my attention about this two-story building back then were the stories that had sprung up about Sassoon Effendi's vast private library. It was said that the books were spread out in almost every room of the house; that is was the largest private library in Iraq, with works in many languages: Arabic, Turkish, English, French, Italian, Spanish and German – all the languages Eskell could speak fluently.

Unfortunately, most of the books were lost when the library was confiscated by the Baath regime in 1970 in the course of its executions of Jews and Baath opponents. They said that the works had been integrated into the library of the Museum of Baghdad, but during all my many visits there I personally have never been able to find them. I couldn't help thinking of all these things on that wonderful Wednesday – and also of how the house had remained locked up for years. No doubt the Baath regime didn't know what to do with it at first. Perhaps it had also hoped that people would eventually forget the name of its owner.

It was only in the mid-1980s that the house was turned into a theatre venue. Here is where the play "The Melody of the Rocking Chair" was first performed which, with its epoch-making character, was to entrench itself deep in the consciousness of Iraqi theatre-goers. It stayed on the programme for six months.

The protagonists of the play, two up-and-coming actresses who would later become quite famous, Inaam al-Battat (in Germany since 1996) and Iqbal Naim, wandered all over the house, up and down its staircases, across the balcony and past the balustrades. Inaam al-Battat played an aged, house-bound singer who refuses to give up while her assistant tries to console and soothe her. (...)

During the final years of his life Sassoon Effendi sought to crown his life's work with the introduction of a national Iraqi currency, to which end he drew up a carefully thought-out plan. And indeed in spring 1932, a few months before he died, his efforts, supported by another Jew, Ibrahim el-Kabir, the general director of the audit office, bore fruit: the dinar was brought into circulation, replacing the Indian rupee and the Turkish lira which had been in use up to that point. This, too, was one of the great dreams that had its beginnings in this house.

"I lived in it for 3 months while my parents were abroad. I also went there every day after school, all of us cousins did. My memory was of it as a palace - many bedrooms all around the balconies and sweeping staircases on both sides.

We always had all the festivals there - Rosh Hashana, Sukkot, when they built this beautiful Sukka and made it look like a lounge. There were big areas for all of us to play hide-and-seek. The main drawing room was so large, with wonderful chandeliers, a grand piano (Aunty Marjorie played the piano). My parents' wedding photo was taken there, with all the guests on the staircases. "