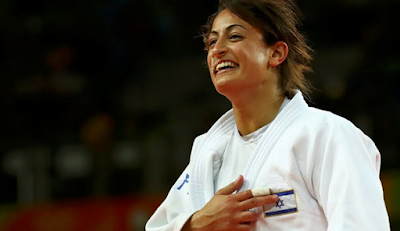 Gerbi: my medal's for Israel

Yarden Gerbi, a judoka who won a bronze medal at Rio, is of Libyan origin. Gerbi, 27,  became the seventh Israeli athlete in history to mount the Olympic podium. She was  only the second woman to do so. 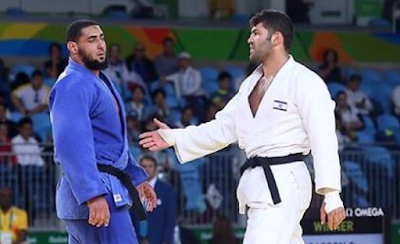 The moment when Or Sasson's outstretched hand was ignored by his Egyptian opponent. Click here to see the video

Also in Olympic judo, Ori Sasson found himself at the centre of a political row when his Egyptian opponent, Islam al-Shehaby, refused to shake hands with him. Born in Jerusalem, Sasson hails from an Iraqi-Jewish family.

Bataween, it would be great if you could put up the video [on the Algemeiner site, I believe] of the winner Sasson walking over to the Egyptian to shake his hand. The Egyptian steps back to avoid contact with the hated Zionist. Then Sasson puts up his hand for a high five which has been done in athletic contests. That too is avoided.

The press, including the BBC, reported boos by the crowd at the Egyptian's actions and the BBC announcer said that it was not fitting the Olympics code to be so unsportsmanlike, as the Egyptian was.

By the way, I noticed that the Egyptian wore a beard without a moustache, which is typical of MB, Hamas, Salafi types.

The egyptian is a salafi, I heard he posted fatwas by saudi clerics on his facebook against jews and christians.