Today is the day when observant Jews recall the destruction of the Jewish Temples in Jerusalem - Tisha b'Ab. Growing up in Marrakesh, Therese Zrihen-Dvir remembers a day of intense but oddly comical mourning practices. The Dafina blog carries an extract from  her book: Derriere les remparts du Mellah de Marrakech. 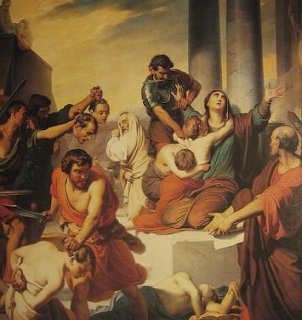 Hannah and her seven martyred Macabee sons symbolise the Jewish resistance to assimilation. They have inspired painters through the ages.

I was only eight or nine years old and was horrified at the sight of women in mourning, scratching at their faces and tearing their black clothes as they danced to a macabre rhythm while uttering sharp little squeals. We found it rather comical, albeit distressingly tragic.

These sad traditional practices would be repeated on the ninth day of the month of Av, which commemorated the destruction of the Temple in Jerusalem. Myself, I knew nothing of the events being marked on that date. We children copied the adults without knowing or understanding what made them behave in this way. Custom dictated that we should spread ash on our heads, imitate their dancing, punctuated by strident little cries and scratch at our faces and rend our clothing. We continued such sinister folk customs under the noses of our elders without them explaining why we did them. We were simply content to ape them, and that was all that mattered.

I remember coming home to my grandparents, my cheeks glowing after making fun of these mourning practices. Grandma scolded me and as a punishment banned me from going out with my friends. When she recovered her composure, I approached her and told her I would never again do such wicked deeds. "But Grandma, I asked,"why do we do these things?"

The grandmother then told the child the story of Hannah and her seven sons, who chose martyrdom rather than abandon their Jewish identity.

History never stops happening.The same applies to the practices associate with commemorating the destruction of the Temples; Both by the Babylonians and the Roman Empire. Now the Jews are in a position to write 'FINIS' to what is still not over.
End any and all control of the Temple Mount by our Muslim enemies. Without sinking again into the usual junk academic,debating society rhetoric about who has the most custodial rights or how many times it's NOT mentioned in the Qu'ran.
Let's just do it. As peacefully as possible.But as decisively as required. The same applies to what the Jews of the Diaspora HAVE to do to THEM at the most local levels. While adhering as diligently as possible to local laws and regulations governing the right to peaceful assembly,and public exposure of the most appalling facts about our enemies and their well greased 'n.g.o.s' & supporters. As close as possible to where it hurts THEM the most.We too have the right to righteous retribution against enemies who understand no other language. No other option exists.

Jews in Seattle preserve the Ottoman-era Tisha B'av Ladino liturgy they brought over from Rhodes
http://jewishstudies.washington.edu/sephardic-studies/tisha-av-sephardic-seattle-ladino-journey-old-world-new/

9 Av was actually rather quiet. Adults unless they were working didn't go anywhere. Women sat on low stools and the stories told were the destruction of the temple the students of Rabbi Akiva and the Spanish expulsion. What she is describing is women following a funeral (les pleureuses).

In the article she said at that age she told her grandfather of her thirst to learn the bible. Well, unless she was born before 1900 there was an alliance school in Marrakech that provided religion classes with more bible stories than anyone could handle.

Hello Sylvia,
I was born in Marrakech 1945 spring, and my grand father was the president of the local Jewish community - Rabbi Judge. I was at the alliance school. I suggest for more details to read my book : Once upon a time... Marrakech la Juive. These rites were very common on the desease of a parent, family and in the 9 of av. It is not n'importe quoi Sylvia. You're wrong. Sorry. Have a great day,
The author
Therese Zrihen-Dvir
http://theresedvir.com/

Santa Tale
I was now seven years old and in grade five, in primary school. With the advent of Christmas, we received many books with wonderful pictures and stories about Santa Claus. We were even taught a beautiful song which we sang loudly a few weeks prior to the New Year's holidays:

It was indeed very unusual that a Jewish School would teach something about conventional Christian holiday. Apparently, the Alliance Institution considered this specific aspect as alien to religious rituals. In our Jewish eyes therefore, Santa Claus bore the image of a little old man coming from the North Pole, carrying many toys for all the children of the world. We kids, believed strongly in him and every year hung out our socks as Christian children commonly do.
It came as no surprise to anyone that the night before Christmas, I would ask my Grandma to hang my socks on top of her clay stove. No chimney existed then in Morocco, and rare were those who had seen one. Grandma never queried my demands although Santa Claus meant to her "Christianity". It seemed then that the Jewish quarter's families were exceptionally tolerant to include Santa Claus as a fairy tale, rather than as a religious practice.
......