Lessons of exile for a refugee from Iraq 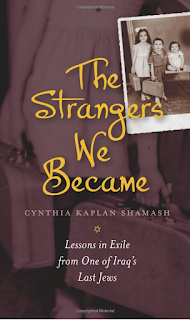 How does a Jewish refugee from Iraq cope - not just with physical displacement, but cultural exile? The question is stylishly answered by Cynthia Kaplan Shamash in her witty and exhilarating memoir, The Strangers we became. Lyn Julius reviews the book in the Jerusalem Post:


Cynthia Kaplan Shamash was just nine when she was taken alone into a room by the Iraqi secret police and accused of spying: her interrogators dismembered the doll she was clutching to see if it had a bugging device inside it.

Cynthia still has the doll, a lasting reminder of the antisemitism her Jewish family had endured in the 1970s. They  made a failed attempt to escape, followed by five weeks of detention. Cynthia, her three siblings and parents eventually leave Iraq with a passport, but their home is sequestered and their possessions stolen. The day of permanent departure arrives,  the children incongruously dressed in their smartest clothes.

'The Strangers we became: lessons in exile from one of Iraq's last Jews'   is Cynthia's charming coming-of-age memoir: she moved from Iraq to Turkey, then Israel, settling in Holland,  one of few countries then to offer Iraqi Jews asylum. Cynthia moves to the US to pursue her dentistry studies. Five countries in 12 years.

On leaving Iraq, she captures beautifully her first sighting of the sea, the welcome ringing of 'phones - Jews were not allowed telephones in Iraq - but also the estrangement of exile in the West.  Perhaps because they hoped their father stood a better chance of finding a job, the family choose not to join their raucous relatives in Israel and resettle in Holland instead.

The small number of Jewish refugees from Iraq  are housed in a dour Amsterdam apartment block with Surinamese immigrants for neighbours. Mastering Dutch is difficult. Cynthia's Jewish school is no less alien and the pupils cliquey and spoilt. Her attempt to  to gain popularity by taking up horse-riding literally barely gets off the ground.

Cynthia's father is 24 years older than her mother - and sensing the couple's unhappiness, the family's well-meaning social worker sends him away from the family home despite his fragile health. But the separation kills him. Even for unhappy couples, Iraqi custom dictates 'till death us do part'. After her husband's death the widow will not remarry.

The refugees must navigate between different worlds: uninhibited liberalism and conservatism,  Dutch rationalism and Iraqi superstition. Whereas a Dutch person might offer a visitor a cup of coffee, an Iraqi hostess will cook a whole meal for them. There are later challenges - such as how a girl from a sheltered background might handle boyfriends.

Aged 12, like a character from a Bronte novel, Cynthia is sent to live with an ultra-orthodox family in London's Stamford Hill. The experience is not the disaster one might have expected. The religious, if austere, atmosphere gives Cynthia the structure which has been lacking in her life.

She returns to Holland determined to do well academically -  somewhat more devout than when she left, yet with the confidence to face the world.

This is a vivid, witty, exhilarating and at times disarmingly frank, read. Some things are best expressed in Judeo-Arabic, which Cynthia obligingly translates for us. These are the lessons of exile: strive to do well,  make your family proud, be optimistic, resilient, and don't look back.