Iraq-born Benjamin (Fuad)  Ben-Eliezer, ex-defence minister, general and veteran politician, has died aged 80. He was the first  Israeli minister to meet Yasser Arafat in 1994, and had a clubbable relationship with President Mubarak of Egypt. In his later years his reputation was tarnished by allegations of corruption. The Times of Israel reports: 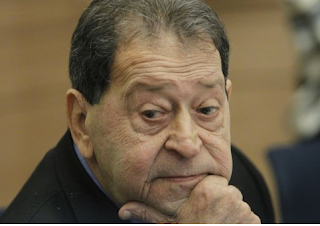 Known as “Fuad” to friends, family and among the public, Ben-Eliezer was born in Basra, southern Iraq, in 1936.

At age 12, with the founding of the State of Israel, Ben-Eliezer was forced to flee Iraq alone. Traveling by foot with a group of Jews, he headed toward Tehran. He described the journey in detail in 2011 on the Uvda TV program, saying he was beaten repeatedly along the way and rescued from a swamp without his shoes.

In Tehran, his mother had told him, there was an aunt who owed the family a favor. For eight months, he recalled, his mother had quizzed him on his ability to speak his family name and the aunt’s address in Farsi. Upon arrival, he made his way to her palatial home, repeated the proper words, and saw the door slammed in his face.

Sobbing uncontrollably on the way back to the temporary refugee camp in Tehran, he said the tears suddenly dried up and a realization set in: “That’s when I realized it was over. You will live alone. You are alone. Iran hardened me,” he said. “My emotions cannot be penetrated and harmed without me allowing it to be so.”

In Israel, Ben-Eliezer, who spoke the Queen’s English and accentless Arabic and Hebrew, was drafted to the Golani Brigade in 1954. He fought in the Sinai during the Suez War in 1956 and commanded the Sayeret Shaked recon unit during the Six Day War. Afterwards, serving under then-GOC Southern Command Ariel Sharon, he led many of the cross-border counterstrikes against terrorists operating from within Jordan.

In early 1968, Ben-Eliezer set out with 12 men, on two helicopters, toward Petra, the ancient Nabatean palace in Jordan, which Israeli military intelligence claimed was being used as a base for Fatah terrorists. As the lead helicopter landed, the gunmen opened fire, wounding Ben-Eliezer and the military correspondent Ron Ben-Yishai, who described the event in an article for Ynet.

Bleeding from a bullet wound to the ankle, he directed the second chopper to safer ground and radioed Sharon, saying, “There is a pretty big enemy force there. I can continue the mission but it’s borderline…your call.” He did not mention that he [and Ben-Yishai] had been wounded in the initial approach.
Later, in the mid-seventies, he was one of the first Israelis to travel covertly to Lebanon and establish ties with the Christian Phalange forces there.