With thanks: VDM Platypus

A few weeks ago Point of No Return quoted a report that land in Algerian-Jewish cemeteries was being expropriated as a result of French and Algerian government plans to amalgamate cemeteries and transfer graves in Algeria.  Over 1, 000 people signed a petition expressing their fears that Jewish graves might be desecrated. 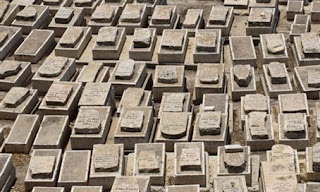 It has since transpired that  the French Consistoire, which deals with Jewish religious affairs, has given its full  blessing and consent to the transfer, which will begin in 2017 at a cost of 1.5 million Euros: only 1,136 out of 57, 898 Jewish graves will be affected, it says. Only 31 out of 81 Jewish cemeteries will be amalgamated. Each transfer must be made with the Consistoire's  consent,  in strict conformity with Jewish law and in coordination with the French rabbinical authorities. (Families will still be permitted to have the remains of their loved ones 'repatriated' to France at a cost of around 3, 500 Euros.)

The Consistoire has insisted that any exhumation be done by hand and under the supervision of a Jew. The bones must be wrapped in a shroud and reburied in a separate coffin and where possible identified with a plaque. There must be a gravestone for every six exhumations. The transfer must be done to the nearest amalgamated Jewish cemetery. All the Consistoire's demands have been accepted by the French government, it says.

In June 2016, Consistoire president Joel Mergui issued a statement that since 2009 the Consistoire has been involved in official transfer plans (France is still in charge of the Jewish and Christian cemeteries in Algeria) . The Consistoire  established a Commission to coordinate the renovation and preservation of the Jewish cemeteries. It carried out an inventory in 2012. Many of the graves are in a derelict state, overgrown with vegetation and subject to earthquakes, but none, says the Consistoire, have been desecrated and no tombstones vandalised. 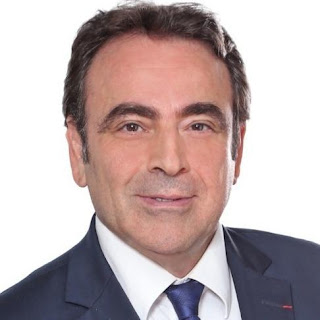 Joel Mergui, president  of the Consistoire

The Consistoire says the Jewish cemeteries will be renovated and gravestones repaired, walls built around them and a warden (most often the same person supervising the adjoining Christian cemeteries) appointed to maintain them.

What will be done with the land released as a result of the transfer project? The Consistoire wants to see only public projects built by the Algerian authorities - parks, schools or hospitals. Whether this will actually happen is an open question.
Posted by bataween at Sunday, August 21, 2016