Coexistence in Hebron ended in 1929

It is 87 years this week since the outbreak of the Hebron massacre. From that event onward, the Arabs ceased to distinguish between the Sephardi veterans and the Ashkenazi newcomers to Palestine. Shortly afterwards, the Jews evacuated the city on the advice of the Britsh, who could no longer guarantee their safety. David B Green writes in Haaretz: (with thanks: Lily) 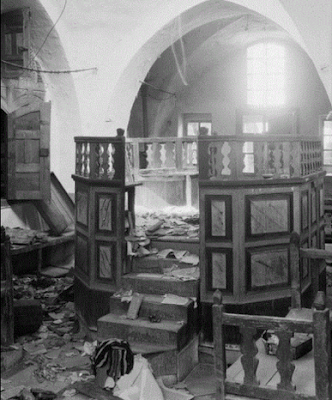 The destruction in a Hebron synagogue in August 1929 (Photo: Library of Congress)

August 23, 1929, marked the beginning of two days of murderous rioting against the Jewish population of Hebron. More generally, it marked a week’s worth of disturbances in British-controlled Palestine, in which Arabs attacked and killed their Jewish neighbors, with there being some attacks by Jews on Arabs.

At the end of a week of violence, 133 Jews were dead, and 110 Arabs had been killed, nearly all of the latter by British security forces.

By far, the worst of the violence against Jews took place in Hebron, at the time a city of some 21,000 residents, of whom some 700 were Jewish and the remainder Arab Muslims.

The Jewish population was divided into Sephardi veterans, whose ancestors had lived in the ancient city for hundreds of years and coexisted peacefully with the Arab majority, and Ashkenazim, who had begun arriving from Europe in the mid-19th century.

In his recent book “Year Zero of the Arab-Israel Conflict: 1929,” Hebrew University lecturer Hillel Cohen suggests that for the Palestinian population, the distinction between the Sephardic veterans and the Zionist newcomers lost its significance in 1929. From that time, whatever their respective individual ideologies might have been, all were seen as part of a movement that intended to create a Jewish majority, if not an actual state, in the land.

Among the Jews too, as they became a target for Arab violence, it was inevitable that they became more defensive and insular, even if they personally believed the land could be shared.

Cohen cites the writer S.Y. Agnon, who following the 1929 massacres, expressed his feelings about the country’s Arabs this way: “Now my attitude is this. I do not hate them and I do not love them; I do not wish to see their faces. In my humble opinion, we shall now build a large ghetto of half a million Jews in Palestine, because if we do not, we will, heaven forbid, be lost.”


The mutual fear and suspicion received a big push from Haj Amin al-Husseini, the grand mufti of Jerusalem at the time. In statements that will echo with familiarity to contemporary ears, he spread the idea that the Jews intended to conquer the Temple Mount and to desecrate or even destroy Al-Aqsa Mosque.