The Moroccan media is awash with news (such as this item in Morocco World News) of the passing of Boris Toledano, 97, head of the Jewish community of Casablanca - perhaps because every Jew still in Morocco is a triumph for 'coexistence' and pluralism. (Toledano  died of natural causes, they are anxious to stress, unlike this unfortunate couple.) (with thanks: Michelle) 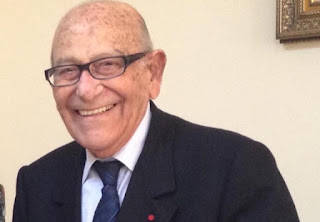 Rabat – The president of the Jewish community of Casablanca died on Wednesday August 10 in Casablanca at the age of 97.

The news of his death was announced by Vanessa Paloma, a member of the Casablanca Jewish community.
“The sad news of the death this morning of a great leader of our exemplary Jewish Community of Casablanca: Mr. President Boris Toledano left me heartbroken. He was a great man, an example of joy, courage, and rectitude,” she said on her Facebook page.
Aged 97, he died a natural death according to his friends and relatives.

His disappearance sparked strong emotions within the Jewish community in Casablanca and across Morocco with many on social media regretting his death.

Read article in full
Posted by bataween at Thursday, August 11, 2016

A good man yet a tough and capable leader. He was a tremendous help to me with the details of my mother's funeral.